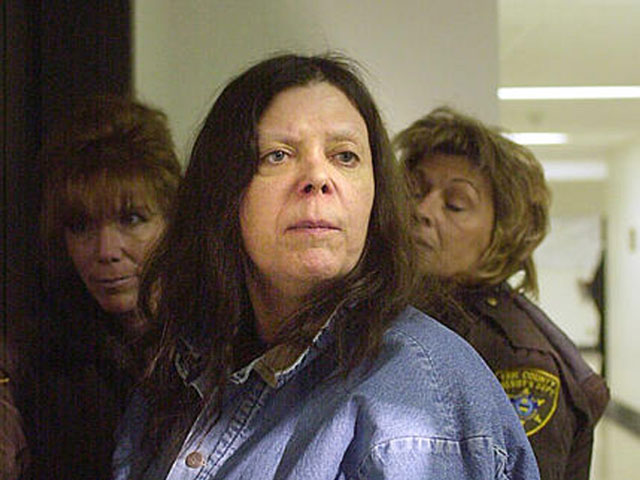 ERIE, Pa. (CBS/AP) A Pennsylvania jury found a 61-year-old woman guilty Monday of participating in a peculiar robbery plot seven years ago, which involved a pizza delivery driver being forced to rob a bank while wearing a metal bomb collar that exploded shortly after the heist, killing him.

Marjorie Diehl-Armstrong, of Erie, was convicted on charges of armed bank robbery, conspiracy and using a destructive device in a crime of violence for her role in the complex crime that killed 46-year-old Brian Wells in 2003. She faces life in prison when she is sentenced Feb. 28.

According to prosecutors five people were supposedly involved in the crime, including the victim, Wells.

Reports indicate that Wells served as a pizza man and walked into a PNC bank on Aug. 28, 2003 with a metal collar bomb locked around his neck. He reportedly walked out of the bank with $8,702 before police stopped him and put him in handcuffs. While waiting for the bomb squad to arrive the device exploded, killing Wells.

Prosecutors later revealed that Wells was in fact involved in the heist and probably only realized he was in immense danger when he was forced to wear the bomb collar just minutes before the robbery. Diehl-Armstrong and three other men were also involved in the heist, according to prosecutors - one died of cancer, another was killed by Diehl-Armstrong and the third pleaded guilty and testified against her.

Prosecutors say Rothstein, a handyman and substitute science teacher, allegedly constructed the bomb collar using two egg timers supplied by Diehl-Armstrong, but he has since died of cancer.

Another accomplice, 57-year-old Kenneth Barnes, pleaded guilty and is serving 45 years in prison. According to his testimony, Diehl-Armstrong initially planned the robbery because she intended to use the money to pay Barnes to kill her father.

Though Diehl-Armstrong vehemently denied being involved in the heist, Assistant U.S. Attorney Marshall Piccinini said she was involved "up to her eyeballs."

According to Piccinini, Barnes said Diehl-Armstrong was at a meeting the day before the heist in which she allegedly put the bomb collar around Wells' neck to ensure that it fit. Barnes told authorities the original plan was to outfit the collar with a fake bomb to scare the bank teller, but that Rothstein had a live device on the collar that Wells wore to the actual robbery.

Piccinini also claimed that Diehl-Armstrong killed her live-in boyfriend, James Roden, 45, more than two weeks before the robbery because he planned to reveal the plot even though he was initially in on the heist.

Diehl-Armstrong is serving 7-to-20 years after pleading guilty but mentally ill to Roden's murder. She claimed she killed him because he was abusive and didn't do much to help her investigate a robbery at her home, which she accused Barnes of organizing.