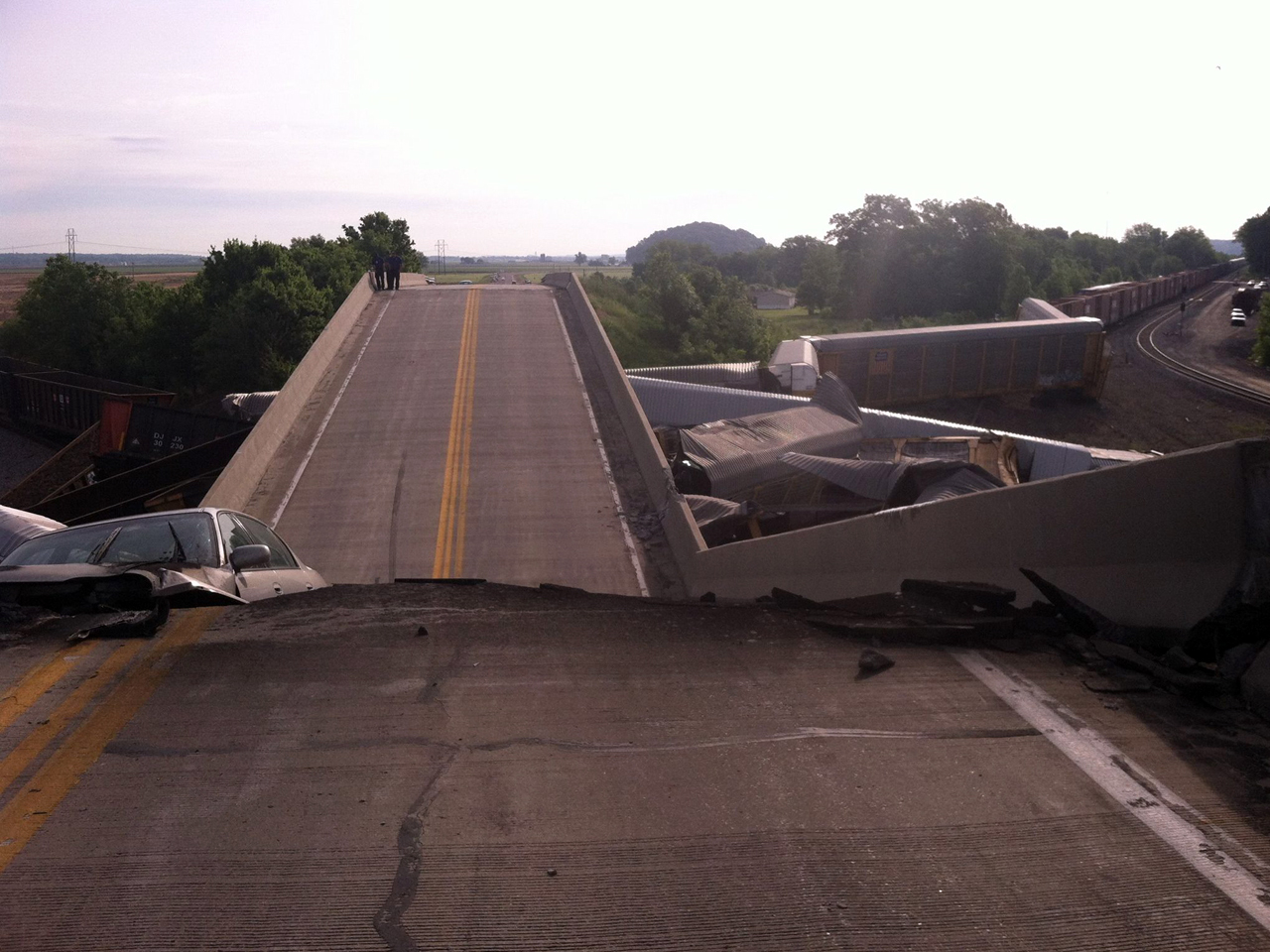 CHAFFEE, Mo. A Missouri highway overpass that partially collapsed when rail cars smashed into one of its support pillars after a cargo train collision was about 15 years old and in good condition but just couldn't withstand the impact, a sheriff said.

Seven people in two cars on the overpass were injured, none seriously, when two 40-foot sections of the overpass crumpled early Saturday.

"You're driving down the road and the next thing you know the bridge is not there. ... It could have been really bad," Scott County Sheriff Rick Walter said. He said the bridge, though in good condition, couldn't withstand the impact of the rail cars.

The collapse occurred after a Union Pacific train struck the side of a Burlington Northern Santa Fe train at a rail intersection, Walter said. Derailed rail cars then struck columns supporting the Highway M overpass, causing it to buckle and partially collapse.

The derailed rail cars were loaded with scrap metal, automobiles and auto parts.

The National Transportation Safety Board has begun an investigation into the cause of the cargo train collision near Chaffee, a small town southwest of Cape Girardeau.

The two cars were the only ones on the overpass at the time, authorities said.

Five people in the two cars were taken to Saint Francis Medical Center in Cape Girardeau, as were a Union Pacific train conductor and an engineer. All seven were released later Saturday, hospital spokeswoman Felecia Blanton said.

Blanton said she was bracing for the worst, given the dramatic footage posted online from the early news coverage. She said it was "a real blessing" that the injuries were relatively minor, the most serious being a fracture.

A diesel fire also broke out in one of the locomotives after the collision, but was quickly put out, Walter said. He said a deputy arriving early on the scene pulled the two Union Pacific employees out of the wrecked engine, which became lodged next to the train's second engine.

The accident came more than a week after a commuter train derailment in Connecticut that injured 70 people and disrupted service for days. That accident involved a railroad corridor used by tens of thousands of commuters north of New York City.

In Washington state this past week, a bridge collapsed when a truck driver's load bumped against the steel framework.

NTSB board member Robert Sumwalt said while the investigations into both collapses are in the early stages "there is no similarity" between the Missouri accident and the bridge collapse in Washington, which sent two vehicles and three people falling into the chilly water.

He noted that the Missouri bridge was rated "good" after its last inspection in February.

"This was not because of any lack of integrity of the bridge in southeast Missouri, but because of a train that derailed and had a bunch of rail cars slamming around," he said.

The Union Pacific train was carrying primarily automobiles or auto parts from Illinois to Texas, said UP spokeswoman Calli Hite. She said about a dozen UP railcars derailed but there was no immediate estimate on the damages.

BNSF spokesman Andy Williams said about 12 cars on the 75-car BNSF train derailed. The BNSF crew was not hurt.

Sumwalt said the NTSB investigation to determine a likely cause will include routine testing of railroad employees for drugs and alcohol, testing of the track and rail signals and examinationof the video footage from the front of the train.