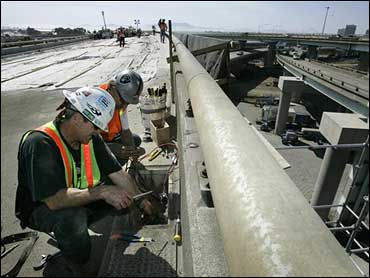 The freeway that collapsed after a fiery tanker crash has reopened just 25 days after the accident, though one expert questioned the safety of the new structure.

The elevated section of highway that carries traffic from the east end of the San Francisco-Oakland Bay Bridge was leveled April 29 after a gasoline tanker truck crashed and burned. Officials and commuters initially thought it would take weeks, possibly months, to fix.

But traffic exited the bridge Thursday night and cruised for the first time over a new 165-foot stretch of highway. The lower deck reopened within 10 days of the collapse.

Department of Transportation officials maintain the rebuilt structure is sound.

"We have compromised nothing in terms of integrity, safety and reliability," said Kevin Thompson, Caltrans state bridge engineer.

But Abolhassan Astaneh-Asl, a civil engineering professor at the University of California, Berkeley, questioned that assertion. He argues that Caltrans should replace the structure's four supporting piers, which he said were also damaged during the 1989 Loma Prieta earthquake.

Astaneh-Asl, who received a $25,000 grant from the National Science Foundation to study the collapse, said he saw a crack inside one pier after a sample had been drilled out for testing.

He said he needs more information before he can be convinced the structure can withstand a major earthquake.

"I really am not going to cross that bridge unless Caltrans releases the information about how and why they decided that bridge is safe to open up," he said.

Caltrans will release such data "as soon as possible," Thompson said at a news conference Thursday.

Thompson said building new piers would be an unnecessary delay. He said the structure was built to withstand "the maximum credible event" that could be expected to occur. He said he could not give the exact magnitude of earthquake that would constitute such an event because too many factors are involved, but asserted the ramp is safe.

Kent Sasaki, of the engineering firm Wiss, Janney, Elstner Associates, which examined the fire-damaged concrete, said during the news conference that most of the damage to the columns was near the surface. He acknowledged there was a crack at the top of one column and said the damaged concrete was replaced.

The construction work was done by Rancho Cordova-based C.C. Myers, Inc., which submitted a low bid of $867,075 for the job, confident it would get the maximum $5 million in bonuses for completion by June 2.

"We didn't cut any corners at all as far as quality," Caltrans senior bridge engineer Peter Stryker said.