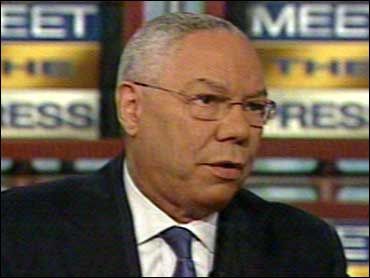 Powell said both Obama and Republican John McCain are qualified to be commander in chief. But he said Obama is better suited to handle the nation's economic problems as well as help improve its standing in the world.

It was an endorsement which also included a blistering critique of the Republican campaign tactics and specifically John McCain's selection of Sarah Palin as his running mate, reports CBS News correspondent Dean Reynolds. And in his statement, Powell said Obama presented a more positive choice for the country.

"It isn't easy for me to disappoint Sen. McCain in the way that I have this morning, and I regret that," Powell said on NBC's "Meet the Press."

"I think we need a transformational figure. I think we need a president who is a generational change and that's why I'm supporting Barack Obama, not out of any lack of respect or admiration for Sen. John McCain."

"I have been honored to have the benefit of his wisdom and counsel from time to time over the last few years, but today, I am beyond honored and deeply humbled to have the support of Gen. Colin Powell," Obama said.

It's just the kind of high profile pat on the back that Obama will use to fight off Republican charges that he lacks the experience and the ability to be President, Reynolds reports.

McCain, appearing on "Fox News Sunday." responded to the endorsement.

"I've always admired and respected General Powell," McCain said. "We're longtime friends. This doesn't come as a surprise, but I'm also very pleased to have the endorsement of four former Secretaries of State - Secretaries Kissinger, Baker, Eagleburger and Haig. And I'm proud to have the endorsement of well over 200 retired Army generals and admirals, but I respect and continue to respect and admire Secretary Powell."

"I am beyond honored and deeply humbled to have the support of Gen. Colin Powell," Obama said in remarks prepared for a rally in Fayetteville, N.C. "Gen. Powell has defended this nation bravely, and he has embodied our highest ideals through his long and distinguished public service. ...And he knows, as we do, that this is a moment where we all need to come together as one nation young and old, rich and poor, black and white, Republican and Democrat."

Powell's endorsement has been much anticipated because he is a Republican with impressive foreign policy credentials. At the same time, he is a black man and Obama would be the nation's first black president.

Powell said he was cognizant of the racial aspect of his endorsement, but said that was not the dominant factor in his decision. If it was, he said, he would have made the endorsement months ago.

Powell served as secretary of state in President Bush's first term, and helped make the case before the United Nations for the U.S.-led invasion of Iraq in March 2003. A retired general, Powell also was the nation's top military commander, chairman of the Joint Chiefs of Staff, during the first Gulf war under President George H.W. Bush.

McCain said he disagreed that Obama is qualified to be president.

"We have a respectful disagreement," McCain, interviewed on "Fox News Sunday," said of Powell.

Powell said McCain has been a good friend for 25 years. But Powell expressed disappointment in the negative tone of McCain's campaign, as well as in his choice of Alaska Gov. Sarah Palin as the Republican vice presidential nominee.

"I don't believe she's ready to be president of the United States," Powell said.

Powell said he does not plan to campaign for Obama.

On CBS' Face The Nation, supporters of both campaigns reacted to the endorsement.

Republicans Gov. Matt Blunt of Missouri and former Rep. Rob Portman of Ohio both said they don't think the endorsement would affect the race in their states, both battlegrounds.

"I don't know that it will make a difference in Missouri. You know, Missourians admire Colin Powell for his many years of service to our country, but in the end they're going to evaluate where the candidates on issues that are important to them," Blunt told host Bob Schieffer.

"I don't think it makes a big difference," added Portman. "Endorsements are typically overrated I think. But Colin Powell is well respected. I was interested to see that he said this morning that he thought either man would be a good president. It didn't surprise me a lot because I've heard General Powell talk about both candidates. He says he respects both men but he's always had a special admiration for Senator Obama."

But Democratic Gov. Tim Kaine of Virginia had a different view, saying he thought the endorsement would make a difference in favor of his candidate and calling it "very important" in his state.

"General Powell is not seen as a dividing figure but a uniting figure. And so him vouching for Senator Obama convinces those of us who want to see a greater unification of the nation that he's the right guy," he said. "Second, General Powell is not an ideological figure. He's a pragmatic person. And so those of us who are, you know, pragmatists first who worry about results and just trying to do the right thing and manage government well, I think they'll see the endorsement by General Powell very positively. Finally it vouches for the senator in terms of that critical issue. We know he has plans to make a change in direction of national security policy. To have the confidence of General Powell in this election is very important. Virginians care about this. We're a state that loves the military. A lot of installations, a lot of folks in service or veterans. So General Powell's endorsement will mean a lot to Virginians, especially the undecideds and Independents."

Democratic Rep. Debbie Wasserman Schultz of Florida said she also thought the endorsement would "resonate" there.

"We have thousands of military retirees in the state of Florida," she said. "And I think what Colin Powell's endorsement does say is it shows that Barack Obama can build bridges across party lines. He's going to be able to reach out and bring in and embrace different ideas and, you know, isn't necessarily, you know, cut from one particular cloth."