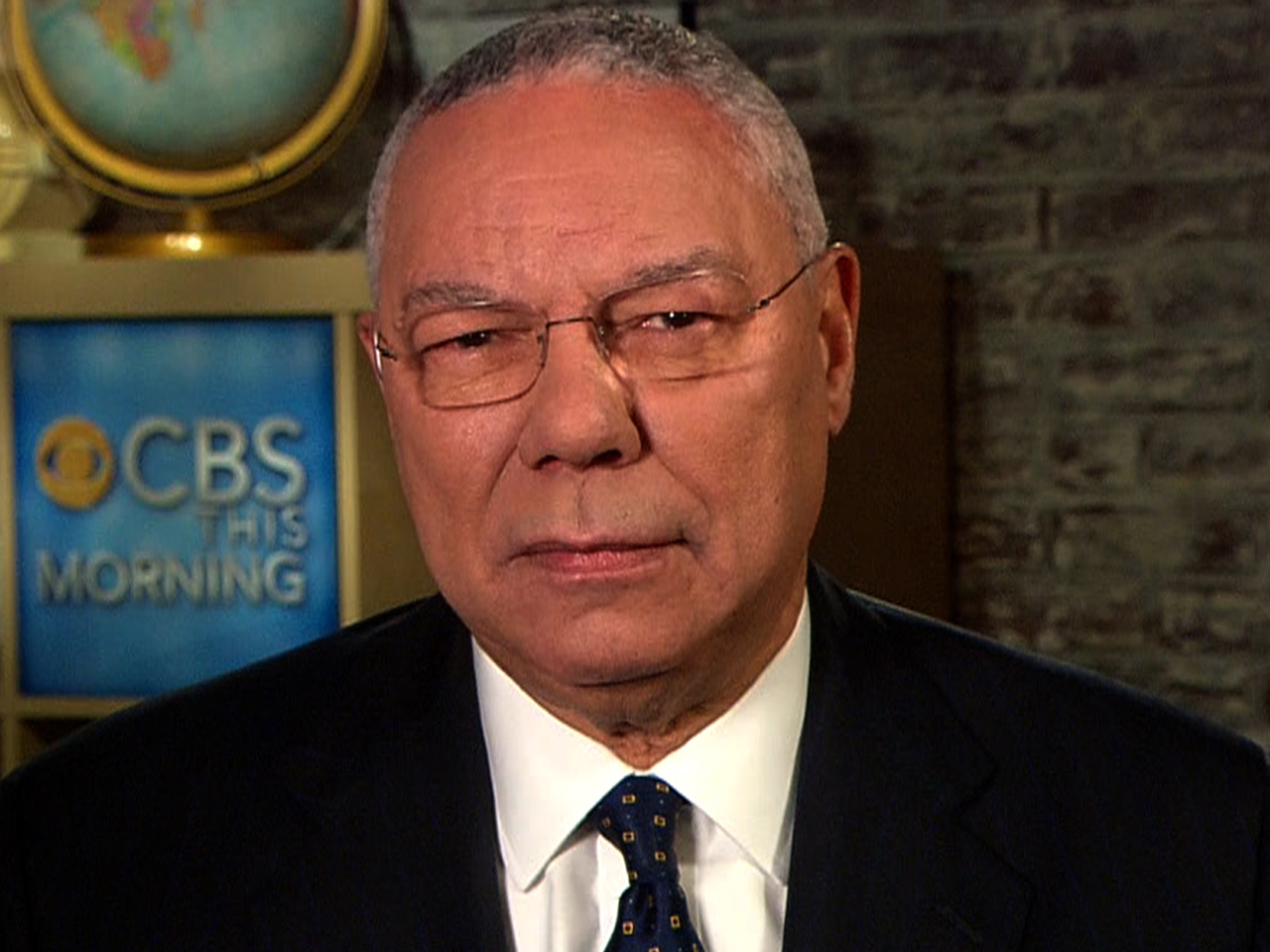 With 12 days to go before the presidential election, Powell publicly endorsed President Obama for re-election on "CBS This Morning" Thursday

Powell explained his choice to Charlie Rose and Norah O'Donnell:

When he took over, the country was in very very difficult straits. We were in the one of the worst recessions we had seen in recent times, close to a depression. The fiscal system was collapsing. Wall Street was in chaos, we had 800,000 jobs lost in that first month of the Obama administration and unemployment peaked a few months later at 10 percent. So we were in real trouble. The auto industry was collapsing, the housing was start[ing] to collapse and we were in very difficult straits. And I saw over the next several years, stabilization come back in the financial community, housing is now starting to pick up after four years, it's starting to pick up. Consumer confidence is rising."

Summarizing the past four years under Obama, Powell said "Generally we've come out of the dive and we're starting to gain altitude." He acknowledged that problems remain, saying "The unemployment rate is too high, people are still hurting in housing but I see that we're starting to rise up."

Turning to foreign policy, Powell said he saw "the president get us of one war, start to get us out of a second war and did not get us into any new wars. And finally I think that the actions he has taken with respect to protecting us from terrorism have been very very solid. And so, I think we ought to keep on the track that we are on."

Powell expressed his concern about Republican candidate Mitt Romney's changing positions on international affairs. "The governor who was saying things at the debate on Monday night ... was saying things that were quite different from what he said earlier. I'm not quite sure which Gov. Romney we would be getting with respect to foreign policy."

"One day he has a certain strong view about staying in Afghanistan but then on Monday night he agrees with the withdrawal, same thing in Iraq. On almost every issue that was discussed on Monday night, Governor Romney agreed with the President with some nuances. But this is quite a different set of foreign policy views than he had earlier in the campaign. And my concern ... is that sometimes I don't sense that he has thought through these issues as thoroughly as he should have."

Powell also said that he has given close consideration to Romney's domestic policies. "As I listen to what his proposals are especially with respect to dealing with respect to our most significant issue, the economy, it's essentially let's cut taxes and compensate for that with other things but that compensation does not cover all of the cuts intended or the new expenses associated with defense."

Powell said that he did not give either candidate early notice of his endorsement, but that he has "the utmost respect for" and spoke to Gov. Romney several weeks ago, and speaks to President Obama regularly.

He added that with this endorsement, he "signed on for a long patrol with President Obama" and that he feels more comfortable with Obama's stances on climate change, immigration, and education.

Powell also criticized congressional leaders for not living up to their responsibilities, mainly around resolving the approaching fiscal cliff.

"The major problem faced either by Gov. Romney or President Obama, whoever wins the election, is going to be what to do about the fiscal cliff we're about to fly over," Powell said.

"This is something that was put in place by Congress and while we're talking about the two candidates for president let's not forget that Congress bears a lot of responsibility for many of the problems that we have now. They're the ones that write the appropriations bills. They're the ones that pass the legislation for more spending and for the various entitlement programs that people have trouble with."

Gen. Powell last joined "CBS This Morning" in June, and at the time remained noncommittal about his support for either candidate in the race for the White House. "Whatever judgement I have right now would be incomplete. I haven't seen everything that Mitt Romney is going to do. I haven't seen how our economy is going to play out," he said in June.

And, despite his endorsement of a Democratic candidate in two presidential elections, Powell says he remains a Republican. "I think I'm a Republican of a more moderate mold," he said before adding, "That's something of a dying breed I'm sorry to say."