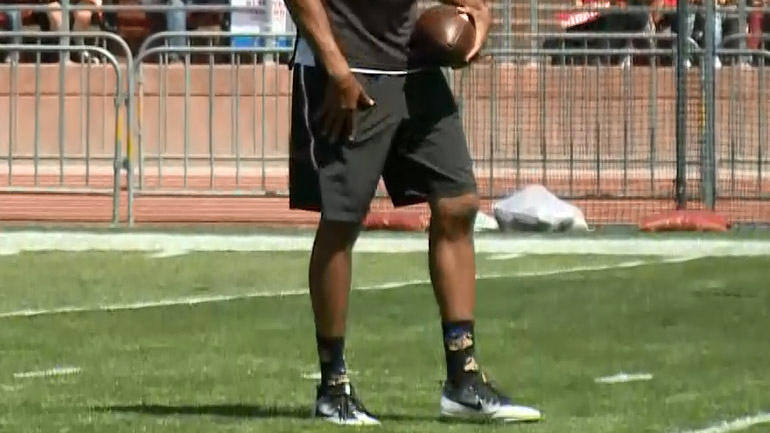 Hours before kickoff of Thursday’s preseason game in San Diego against the Chargers, photos emerged from practices in August showing Kaepernick wearing black socks with images of pigs wearing police hats on them.

“It’s just ridiculous that the same league that prohibits the Dallas [Cowboys] football club from honoring the slain officers in their community with their uniforms stands silent when Kaepernick is dishonoring police officers with what he’s wearing on the field,” Bill Johnson, executive director of the National Association of Police Organizations, told USA Today Sports.

“I think the league is in a downward spiral regarding their obligations to the public under [commissioner] Roger Goodell, and this is just another example of that,” he said.

The quarterback explained why he wore the socks in an Instagram post Thursday morning and tried to quell the latest firestorm. He said that he had “two uncles and friends who are police officers and work to protect and serve ALL people.”

Kaepernick planned to continue his protest of sitting for the national anthem before Thursday’s game at 7 p.m.

His decision to sit during the pre-game national anthem in protest over the state of race relations in America has become a flashpoint of debate in Bay Area offices, in the media and on social media.

A Survey/USA poll released Thursday found that 79 percent of those asked had heard or read news stories about Kaepernick’s protest. Of those who responded, 55 percent did not respect his decision to sit for that national anthem.

Earlier this week, the San Francisco Police Officers Association sent a letter to San Francisco 49ers owner Jed York and the NFL, ripping Kaepernick for his comments about the behavior of police officers in his defense for sitting during the national anthem.

On Sunday, Kaepernick met with reporters and explained why he was taking his stand.

“There is police brutality - people of color have been targeted by police,” he said. “That’s a large part of it. They (the police officers) are government officials. They are put in place by the government so that’s something that the country has to change. There are things we can do to hold them more accountable. Make those standards higher…You have people who practice law, lawyers, who go to school for eight years, but you can be a cop in six months. You don’t have to do the same amount of training as a cosmetologist. I mean someone with a curling iron has more education and training than people who have a gun. That’s insane.”

In its letter to the 49ers and the NFL, the police officers assocation said it “will not stand by while he (Kaepernick) attacks police officers in this country with statement such as ‘people are on paid leave while people of color are killed.’”

The organization said Kaepernick’s comments show the quarterback has “an incredible lack of knowledge regarding our profession and officer-involved shootings, but also shows a naivety and total lack of sensitivity towards police officers.”

The association asked the NFL and the 49ers to “separate” themselves from the comments.

“While the SFPOA acknowledges Mr. Kaepernick’s right to speak his point of view and we stand by this right, we also recognize your organization’s ability to denounce his foolish statements and separate yourself from his actions,” the letter read.

The group closed the letter by offering Kaepernick, any member of the 49ers or the NFL the opportunity to come and spend time at the police academy to get a first-hand idea of the training of a police officer.