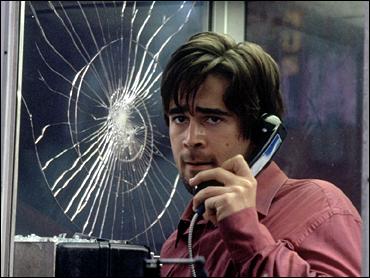 In the last nine months Colin Farrell has co-starred in three films that have opened No. 1 at the Box Office: "Minority Report," "The Recruit," and "Daredevil."

The first film riding on his name as star - "Phone Booth" - opens Friday. In it, he plays Stuart Shepard, a ruthless, self-absorbed publicist who picks up a ringing pay phone, and hears the menacing voice of a sociopath, played by Keifer Sutherland, who threatens to kill him if he hangs up.

Stuart Shepard likes to be called Stu and refers to himself in the third person, says Farrell. "I got most of my information about Stu from what the caller was saying, 'cause Stu isn't really revealing anything about himself until the end. It's all the caller," Farrell tells The Early Show co-anchor Hannah Storm.

It is the caller who brings him out. "Pointing out things about his character - character flaws, reminding him about his actions and how they reflect other people's lives. He was a blast to play. He went on a total journey in a short space of time."

His character goes through a transformation. "In just an hour and twenty five minutes, "Farrell says, 'Cause the film was shot in real time. But it was also shot in just 12 days and it was 10 days in the booth," Farrell says.

Which presented some challenges for Farrell. "It was this unusual film conceptually, you know, one guy in a phone booth, the police outside and all that kind of stuff. So they didn't want to, I suppose, for money wise, financially, they didn't want to have too long a shoot, but it helped me. It helped me, 'cause it was really frustrating, and it was a lot of tough work and there was no waiting around. There was no time for long meaningful pauses, it was just a matter of getting in there and getting it out."

Farrell says there was no time for him to get comfortable.

As for being in that booth, he says he did not notice it as much.

"I was so in my head, and just so in my body that I didn't even notice so much the confines of the space, because the space was just me. Me and the receiver, with someone on the phone that was threatening to kill me," Farrell explains.

"Phone Booth" was originally supposed to be released last November, but when the sniper attacks happened in Washington, D.C., last fall, the film studio decided to postpone it. The decision made perfect sense to Farrell.

"The joy or pleasure that's derived from it comes from the practicality of doing the work, not from seeing it on the screen, not in going, 'Whoa, No. 1 at the box office.' Don't get me wrong, when 'The Recruit' was No. 1, I was more, 'Whew, something that did a bit of money at last.' But that's not the be all and end all. It's not the goal for me, so I didn't care. You know, there were people dying, with the Beltway sniper. You know people were dying and they hadn't apprehended those two yet, so I was fine with it," he says.

And the timing could not be more ironic: He plays a publicist in the film and Farrell is himself the subject of all sorts of tabloid fodder these days, most of which he says he takes with a pinch of salt.

"Of course, my face is 20 feet on a cinema screen and people are going to want to know where you're eating, what you're drinking, who you're kissing, of course. It's par for the course. I'm not saying that I like it or enjoy it, but it's going to happen, so just let it happen. People have jobs to do and I'll just do my job and live my life," he says.

He is about to become a dad and says, "Being a father, having a child," is what he is looking forward the most. Farrell who is the youngest of four in his family said, "The baby is going to have a baby."