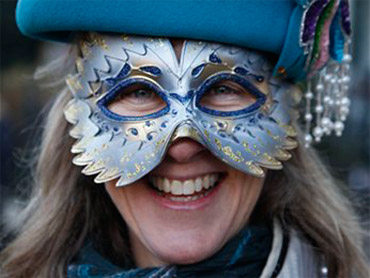 Pete Fountain, clarinet in hand and looking dapper in a white tuxedo and fedora trimmed in gold, kicked off Mardi Gras with his "Half Fast Marching Club" the way they have for 50 years: with beads and jazz.

Fountain, 79, has marched every year except 2006, the year after Hurricane Katrina hit, when he had bypass surgery.

Tuesday, the final day of Carnival, was sunny and cold with high temperatures hanging around 50 degrees Fahrenheit. That didn't do much to chill a party that has been rolling since the New Orleans Saints won their first NFL football Super Bowl. The joy of that win fed right into the Mardi Gras.

"I have plenty of antifreeze with me if I need it," said Jessie Grace, 57, playfully waving a flask from his pocket. "If Mardi Gras doesn't warm you up, nothing will."

Grace and about 30 family members and friends staked out their spot on St. Charles Avenue at 2 a.m., setting up chairs and tables. By 7 a.m. gumbo was cooking in a big pot and ribs were on the barbecue grill.

While it was chilly in New Orleans, the hottest temperatures in five decades were melting Carnival revelry in Rio de Janeiro.

Rio's summer has seen record highs of up to 110 degrees Fahrenheit. Couple that with the seaside city's suffocating humidity and the chances that partiers will fall ill increases.

"I never thought I would say this, but it is too hot to party," said 20-year-old Thiago Cerveny, standing on a corner with his girlfriend in Ipanema and debating whether to hit a big street party on the last full day of festivities.

Meanwhile, in the New Orleans, many along the parade route wore Saints jerseys. One group of cyclists was costumed as flying pigs, which long-suffering fans had always said they would see if the Saints won the big game.

"Hell froze over," said Sandra Bell, 51, shivering under a blanket. "Can't you feel it?"

"It's a big, big deal," said Glynn Brown, 55, who joked he had taken out a second mortgage to pay for the Saints gear he and his family were decked out in. "But Mardi Gras is our heritage."

The Saints were toasted as kings, invited by krewes to ride floats across the city. Quarterback Drew Brees, coach Sean Payton and owner Tom Benson served as monarchs of parades, while players Devery Henderson, Charles Grant, Deuce McAllister and others rode a float built by the Krewe of Zulu.

They sparked huge cheers, especially when they tossed small foam footballs to the crowd.

Mayor Ray Nagin and other city officials rode on horseback to the reviewing stand where they watched the parades and toasted the krewes who organize them. Nagin, making his last ride as mayor, wore a jacket saluting the Saints.

By afternoon, crowds on Bourbon Street in the French Quarter had grown. The cold also didn't stop the tradition of people on balconies tossing beads to the crowd below in exchange for a glimpse of flesh.

Elaborate costumes filled the street, with heavy emphasis on the Saints: Two men dressed as the Lombardi Trophy - the totem of the NFL championship - and another group dressed as fleur-de-lis, the unofficial emblem of the city and the team.

The party traditionally wraps up at midnight when the police clear Bourbon Street and Lent begins.