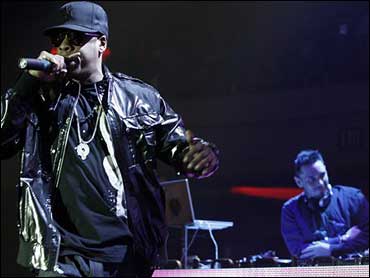 PITTSBURGH (CBS/KDKA) A Jay-Z fan now faces a "Hard Knock Life" himself, thanks to his bizarre - and criminal - alleged behavior following a Jay-Z concert in Pittsburgh on Tuesday night.

Thirty-three-year-old Michael Kamau allegedly entered a home located 1 1/2 miles from the concert venue. A home he didn't live in. A home occupied by one Frank Fontana.

When Fontana felt someone crawl into his bed at 5:30 Wednesday morning, he assumed it was his girlfriend, who had her own set of keys to his apartment. When he called out asking if it was indeed her, he says he heard a low baritone voice respond, "No, it's not."

Fontana jumped out of bed and used a baseball bat to subdue his unexpected overnight guest, then called 911.

Police say that when questioning Kamau, he told him that he "was cold and wanted to come inside." It appears that Kamau was adamant about wanting to get inside Fontana's residence - he broke down two doors to get himself into Fontana's bed. In a written statement, police said that Kamau "appeared to be intoxicated with an odor of alcohol on his breath and bloodshot eyes, but not to the point that he could not realize what was occurring."