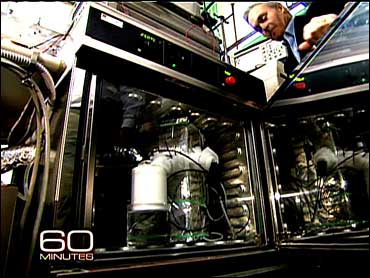 Twenty years ago it appeared, for a moment, that all our energy problems could be solved. It was the announcement of cold fusion - nuclear energy like that which powers the sun - but at room temperature on a table top. It promised to be cheap, limitless and clean. Cold fusion would end our dependence on the Middle East and stop those greenhouse gases blamed for global warming. It would change everything.

But then, just as quickly as it was announced, it was discredited. So thoroughly, that cold fusion became a catch phrase for junk science. Well, a funny thing happened on the way to oblivion - for many scientists today, cold fusion is hot again.

"We can yield the power of nuclear physics on a tabletop. The potential is unlimited. That is the most powerful energy source known to man," researcher Michael McKubre told 60 Minutes correspondent Scott Pelley.

McKubre says he has seen that energy more than 50 times in cold fusion experiments he's doing at SRI International, a respected California lab that does extensive work for the government.

McKubre is an electro-chemist who imagines, in 20 years, the creation of a clean nuclear battery. "For example, a laptop would come pre-charged with all of the energy that you would ever intend to use. You're now decoupled from your charger and the wall socket," he explained.

The same would go for cars. "The potential is for an energy source that would run your car for three, four years, for example. And you'd take it in for service every four years and they'd give you a new power supply," McKubre told Pelley.

"You can imagine a one for one plug in replacement for nuclear fuel rods. And the difference only would be that at the end of the lifetime of that fuel rod, you didn't have radioactive waste that needed to be disposed of," McKubre replied.

He showed 60 Minutes just how simple the experiment looks; there are only three main ingredients. First, there is palladium, a metal in the platinum family. Second, one needs a kind of hydrogen called deuterium which is found in seawater.

"Deuterium is essentially unlimited. There is ten times as much energy in a gallon of sea water, from the deuterium contained within it, than there is in a gallon of gasoline," he explained.

The palladium is placed in water containing deuterium and the third ingredient is an electric current.

The experiment is wrapped in insulation and instruments. They're looking for what they call "excess heat." In other words, is more energy coming out than the electric current puts in?

No one knows exactly how excess heat would be generated, but McKubre showed 60 Minutes what he thinks is happening.

At the atomic level, palladium looks like a lattice and the electricity drives the deuterium to the palladium. "They sit on the surface and they pop inside the lattice," he explained, using an artist's rendition of the lattice.

McKubre believes there is a nuclear reaction - possibly a fusion process like what happens in the sun, but occurring inside the metal, at a slower rate, and without dangerous radiation.

Scientists today like to call it a nuclear effect rather than cold fusion. At least 20 labs working independently have published reports of excess heat - heat up to 25 times greater than the electricity going in.

McKubre has been working on this since that first discredited claim of cold fusion made headlines 20 years ago.

"To work on this issue is almost to put your scientific credibility at risk and I wonder why you've done it?" Pelley asked.

"My belief is that if there's a one percent chance that Fleischmann and Pons were correct, and I now believe that possibility is 99 percent. I have a duty to work on it," he replied.

Martin Fleischmann and Stanley Pons amazed the world in 1989 with their cold fusion news conference at the University of Utah. Fleischmann in particular was one of the world's leading electro-chemists, and the announcement of room temperature fusion set the world on fire.

Immediately, prestigious labs at MIT and Caltech rushed to reproduce the experiment, but didn't get the same results as Fleischmann and Pons.

The careers of Fleischmann and Pons were destroyed as quickly as a nuclear flash - names once linked to a Nobel Prize were forgotten by nearly everyone. And most of the scientific world today is happy to leave it that way.

In the 1950s, he helped design the most successful fusion experiment of all time: the hydrogen bomb.

"It was unfortunately, a very successful experiment," Garwin told Pelley.

Garwin was a critic of Martin Fleischmann back in 1989. And he has seen reports on the research that's been done since.

He thinks McKubre is mistaken.

Asked why, Garwin said, "I think probably he measures the input power wrong."

It's one of the most common criticisms of cold fusion experiments - that the amount of electricity going in and the heat coming out are simply mismeasured.

"It's possible, it is possible, that I have been mismeasuring energy for 20 years, but I think it extremely unlikely. A very large number of people have been making these measurements and measurements of current, voltage, temperature, resistance they're some of the simplest measurements that a physicist or a physical scientist will measure," McKubre said.

But there's another problem that critics point out: the experiments produce excess heat at best 70 percent of the time; it can take days or weeks for the excess heat to show up. And it's never the same amount of energy twice.

"I require that you be able to make one of these things, replicate it, put it here. It heats up the cup of tea. I'll drink the tea. Then you make me another cup of tea. And I'll drink that too. That's not it," Garwin said.

He told Pelley that for him to become a believer, the process would have to work 100 percent of the time.

But McKubre said, "Our critics often complain that we can't boil water to make tea. We could have, in fact, boiled 64 gallons of water and made 1,000 cups of tea, had we chosen to do so."

No one's sure why the experiments can't be consistently reproduced. McKubre thinks it has something to do with how the palladium is prepared. He's working with an Italian government lab called ENEA where some of the most reliable palladium is made.

With so many open questions, 60 Minutes wanted to find out whether cold fusion is more than a tempest in a teapot. So 60 Minutes turned to an independent scientist, Rob Duncan, vice chancellor of research at the University of Missouri and an expert in measuring energy.

"When we first called you and said 'We'd like you to look into cold fusion for 60 Minutes,' what did you think when you hung up the phone?" Pelley asked Duncan.

"I think my first reaction was something like, 'Well, hasn't that been debunked?'" he replied.

We asked Duncan to go with 60 Minutes to Israel, where a lab called Energetics Technologies has reported some of the biggest energy gains yet.

Asked what he thought when he left the Israeli lab, Duncan told Pelley, "I thought, 'Wow. They've done something very interesting here.'"

He crunched the numbers himself and searched for an explanation other than a nuclear effect. "I found that the work done was carefully done, and that the excess heat, as I see it now, is quite real," Duncan said.

Asked if was surprised that he'd hear himself saying that, Duncan told Pelley, "Very much. I never thought I'd say that."

And we've found that the Pentagon is saying it too. The Defense Advanced Research Projects Agency, known as DARPA, did its own analysis and 60 Minutes obtained an internal memo that concludes there is "no doubt that anomalous excess heat is produced in these experiments."

Asked if he feels vindicated after all these years, McKubre told Pelley with a smile, "I don't have any real need for vindication. I know what I've seen."

"That was a pretty big smile on your face though," Pelley pointed out.

"It's good. It's not bad. Certainly it's good," McKubre replied.

Now the Pentagon is funding more experiments at the naval research lab in Washington, D.C. and at McKubre's lab in California.

60 Minutes wondered what Richard Garwin would think of the Defense Department's appraisal.

"Well, that's a statement," Garwin said. "I am living proof that there's doubt. Now, they can say that there, that excess heat is being produced. But they can't say there's no doubt. All they can say is they don't doubt. But I doubt."

"You know, I wonder how you feel about going public endorsing this phenomenon on 60 Minutes when maybe 90 percent, I'm guessing, of your colleagues think that it's crackpot science?" Pelley asked.

"I certainly was among those 90 percent before I looked at the data. And I can see where they'll be very concerned when they see this piece. All I have to say is: read the published results. Talk to the scientists. Never let anyone do your thinking for you," he replied.

There was one more scientist 60 Minutes wanted to find, a man who left America in disgrace and retired with his wife to the English countryside.

Martin Fleischmann, the man who announced cold fusion to the world, is hindered by years, diabetes, Parkinson's disease and maybe a little bitterness. At home, he pulled out an improved version of his experiment, something that he was working on when he was hounded out of science.

"When you hold that in your hand and you think back on what's happened these last 20 years, what do you think?" Pelley asked.

He thinks this way because it was discredited at the time.

He told Pelley he has two regrets: calling the nuclear effect "fusion," a name coined by a competitor, and having that news conference, something he says the University of Utah wanted.

"I think so. It wouldn't take very long to implement this," Fleischman replied, laughing. "You make me feel that I should take a part in this?"

Preppers in 2022: Stocking up and skilling up for extreme catastrophes