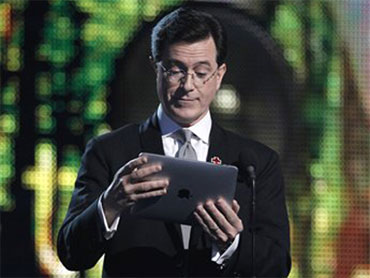 But the host of Comedy Central's "Colbert Report" teamed up Thursday night with Arturo Rodriguez, the president of the United Farm Workers of America, in a challenge to unemployed Americans: Come on, take our jobs.

The union has been asking Americans to fill out an under the banner "I want to be a farm worker" at www.takeourjobs.org

Rodriguez says that so far just three have responded and were in the fields.

"Make that four," the comedian replied emphatically.
The U.S. Labor Department says more than half of farm workers are illegal immigrants. The UFW argues they're not taking jobs from Americans because most don't want the work.

Proponents of tougher immigration laws respond that the problem with the UFW's proposition is that growers don't want to raise wages and improve working conditions enough to attract Americans.

Alec Baldwin to be charged in "Rust" shooting
Thanks for reading CBS NEWS.
Create your free account or log in
for more features.
View CBS News In
CBS News App Open
Chrome Safari Continue
Be the first to know
Get browser notifications for breaking news, live events, and exclusive reporting.