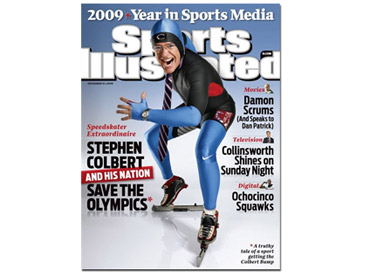 Stephen Colbert has joined the legions of athletes and swimsuit models to grace the cover of Sports Illustrated.

The host of cable TV network Comedy Central's "The Colbert Report" appears on the front of the magazine's latest issue wearing an Olympic speedskating uniform. The issue is devoted to sports media. It's on newsstands Wednesday.

In November, devoted Colbert fans known as the Colbert Nation became the official primary sponsor of U.S. Speedskating. The team's largest annual cash sponsor, DSB Bank NV, left the team in the lurch after it declared bankruptcy in October.

With contributions from fans, more than $250,000 has been raised.

Colbert has made Olympics-related material a nearly nightly fixture on his show.

Other celebrities have appeared on the cover of Sports Illustrated, including comedians Bob Hope in 1963 and Chris Rock in 2000.