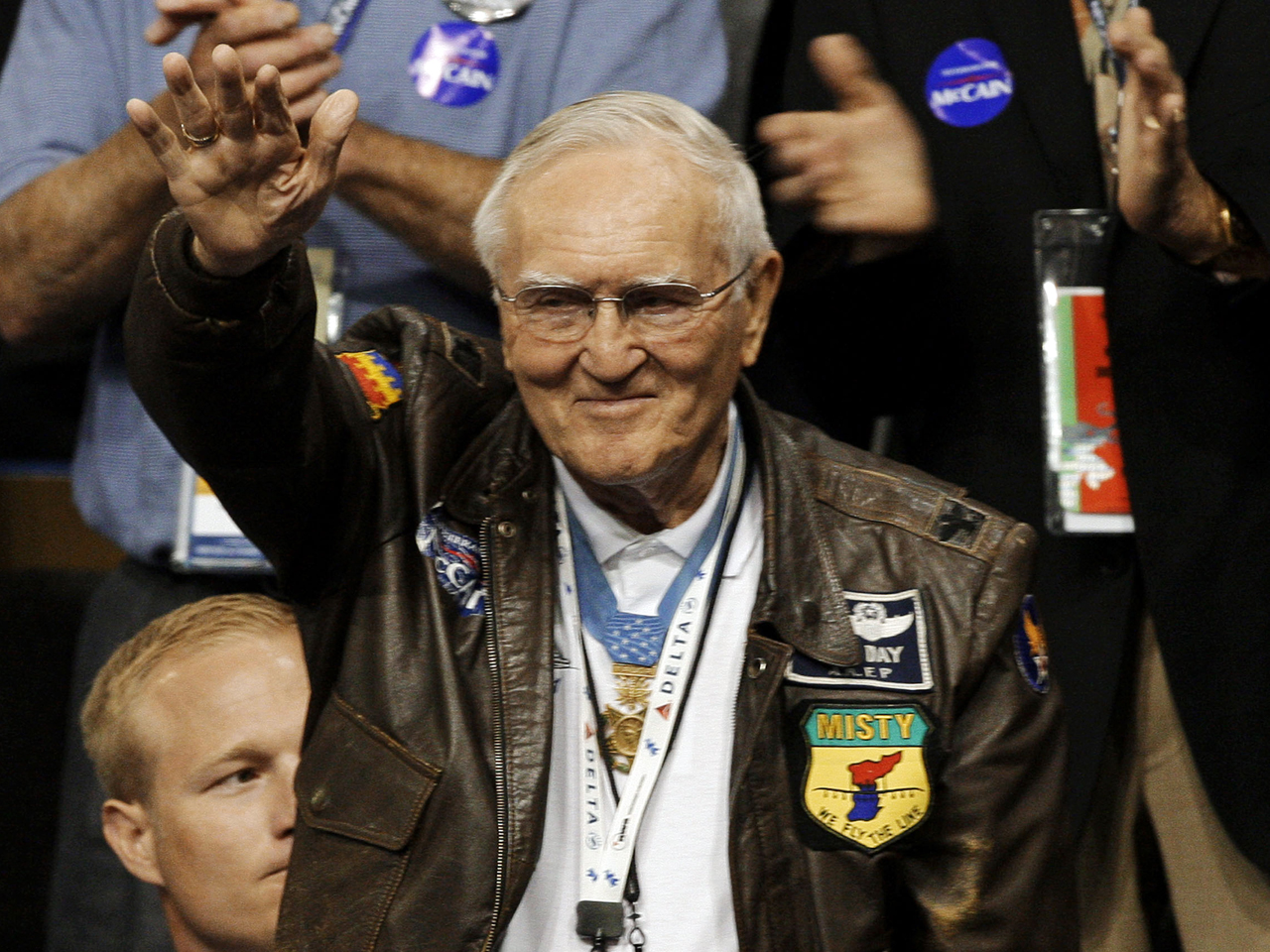 MIAMI Retired Col. George "Bud" Day, a Medal of Honor recipient who spent 5.5 years as a POW in Vietnam and was Arizona Sen. John McCain's cellmate, has died at the age of 88, his widow said Sunday.

Day, one of the nation's most highly decorated servicemen since Gen. Douglas MacArthur and later a tireless advocate for veterans' rights, died Saturday surrounded by family at his home in Shalimar, after a long illness, Doris Day said.

"He would have died in my arms if I could have picked him up," she said.

Day received the Medal of Honor for escaping his captors for 10 days after the aircraft he was piloting was shot down over North Vietnam. In all, he earned more than 70 medals during service in World War II, Korea and Vietnam.

He was an enlisted Marine serving in the Pacific during World War II and an Air Force pilot in the Korean and Vietnam wars.

In Vietnam, he was McCain's cellmate at one camp known as the Plantation and later in the infamous Hanoi Hilton, where he was often the highest-ranking captive. During his imprisonment, the once-muscular, 5-foot-9 Day was hung by his arms for days, tearing them from their sockets. He was freed in 1973 — a skeletal figure of the once dashing fighter pilot. His hands and arms never functioned properly again.

"As awful as it sounds, no one could say we did not do well. (Being a POW) was a major issue in my life and one that I am extremely proud of. I was just living day to day," he said in a 2008 interview with The Associated Press. "One really bad cold and I would have been dead."

In a statement Sunday, McCain called Day a great patriot and said he owed his life to the man. "He was the bravest man I ever knew, and his fierce resistance and resolute leadership set the example for us in prison of how to return home with honor," McCain said.

Born Feb. 24, 1925, in Sioux City, Iowa, where the airport is named for him, Day joined the Marines in 1942 while still in high school. He returned home, graduated law school and passed the bar exam in 1949. He entered the Iowa National Guard in 1950 and attended flight school. He was called to active duty in the Air Force the next year and did two tours as a bomber pilot in the Korean war.

In Vietnam, Day was shot down over North Vietnam on Aug. 26, 1967. He bailed out, but the landing broke his knee and his right arm and left him temporarily blinded in one eye.

In the spring of 1968, Day's North Vietnamese captors opened his cell door and brought in McCain, who was wearing a full body cast and was nearly dead. McCain had been in isolation for seven weeks and could not wash or feed himself, Day wrote in "Return With Honor," his 1989 autobiography.

"We were the first Americans he had talked to. ... We were delighted to have him, and he was more than elated to see us," Day wrote. They helped nurse McCain.

After the war and his release, Day retired to the Florida Panhandle in 1977 and practiced law, becoming a crusader for veterans' health care benefits. He took his fight to the U.S. Supreme Court in 2003 lawsuit that alleged the government reneged on its promise to provide free lifetime health care to hundreds of thousands of Korean and World War II veterans.

The high court declined to hear an appeal of the case brought on behalf of two Panhandle retirees, but the legal action was credited with prompting Congress to pass legislation in 2000 expanding the military's TRICARE health insurance program to include veterans over age 65 who had served at least 20 years or were medically retired.

In his later years, Day also took on Iraq war cases. For example, he represented Army Maj. John Nelson, a medical officer who was wounded when a bomb exploded at a mess hall in Mosul in 2004. Nelson suffered short-term memory loss and spoke with permanent stutter. The Army initially said his injuries merited a 40 percent disability rating. Day, however, persuaded an evaluation board to award full benefits.

"People would stop us in the airports and all over, and we had no idea who they were, and they would say, `Thank you, you saved my husband's life,' or, `You saved my wife's life,"' Doris Day said. The couple celebrated their 64th wedding anniversary in May.

Day was active in McCain's failed 2000 and 2008 Republican presidential bids and in 2004 campaigned against fellow Vietnam veteran John Kerry. Day called Kerry, the Democratic presidential nominee, a turncoat who lied to Congress in 1971 about alleged war atrocities.

"I draw a direct comparison to General Benedict Arnold of the Revolutionary War to Lt. John Kerry," Day said in 2004. "Both went off to war, fought, and then turned against their country."

Day's political activism again caused controversy in 2010 when he supported Gov. Charlie Crist in his failed Senate bid. Day called Crist's primary opponent Marco Rubio "a Hispanic who can run his mouth." He referred to President Barack Obama as "the black one."

Day retired from the Air Force at the rank of colonel, never attaining his general's star. He said he believed he wasn't promoted further because he "told it like it was."

"When I returned from prison, there was a huge amount of the Air Force leadership that were not combat-oriented. They were quasi-political managers," he said.

It said it was his tendency for tough talk that kept him out of politics.

"I probably could have been more tempered in some of my remarks but when they asked, I told them," he said.

He and McCain remained close since they first shared that 9 foot by 15 foot cell, and years later he advised the younger Navy man against running for the U.S. Senate.

"When he first said he was going into politics, I said politics is compromise and John had almost zero ability to compromise," Day said.

He said he told McCain politics was like prostitution.

"You have to do a whole bunch of things and then there is a paycheck," he said.

But Day said his friend later changed his mind by becoming a reformer in Congress.

Campaigning for McCain in his 2008 presidential bid, Day drew comparisons between the lessons of Vietnam and the dangers of an early pullout from Iraq.

"They cut off funding to the South Vietnamese Army and we ended up being defeated, and that's really very relevant to what's happening right now," Day said.

Day worked throughout his life, accepting an appointment to head the 35-employee Okaloosa County Public Defender's Office in 2009 at the age of 83 after the Panhandle circuit's newly elected public defender asked him to take the job as a personal favor.