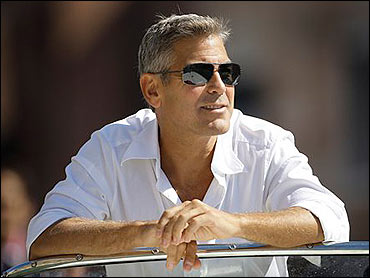 The Coen brothers wrote their dark comedy, "Burn After Reading," with stars George Clooney, Brad Pitt and Frances McDormand in mind. Not necessarily a compliment.

The movie, which premieres Wednesday at the Venice Film Festival, is a tale about idiots - and what happens when their worlds collide.

Pitt and McDormand are a pair of hapless gym employees who get in way over their heads when the memoirs of a failed CIA analyst (John Malkovich) fall into their hands and they try to peddle them as classified intelligence secrets. Clooney plays a hypochondriac philanderer having an affair with the CIA analyst's disappointed wife, played by Tilda Swinton.

"Looking at the parts we are playing, I'm very concerned about what you think of us," Clooney said at a news conference.

It's Clooney's third film with the Coen brothers - completing what he called "his trilogy of idiots" after "O Brother, Where Art Thou?" and "Intolerable Cruelty."

Pitt said he had waited a long time to work with the Coen brothers.

Asked if the movie is a love letter from her husband, Joel Coen, McDormand quipped: "Have you seen the film? And you call that a love letter?"

To point: The movie's opening shots are of McDormand's Linda Litzke having her behind, belly and arms scrutinized by a plastic surgeon in her attempt to fend off middle age.

"We started writing the movie as kind of an exercise, thinking of what kind of parts these actors might play, what kind of story they might inhabit," Ethan Coen told a news conference.

"Burn After Reading" is set within a spy story for no other reason than "we hadn't done one before," Joel Coen told reporters.

McDormand's and Pitt's characters appear driven by a combination of naivete, greed and the kind of trite wisdom and oversimplified world view that can be gleaned from the self-help shelf of the corner bookstore and daytime television.

The film - part comedy, part satire of Washington's government community - got a number of laughs during the press screening ahead of the gala opening Wednesday night.

At one point, Pitt's Chad Feldheimer shows up for an extortion date chewing gum, wearing a bike helmet and calling himself "Mr. Black."

The stars said there was no room for ad-libbing in the tightly written script, which weaves together overlapping stories.

"It's really a funny script. I didn't feel any need to wander off the script," said Pitt. Of his iPod-loving, spandex-wearing character, he said: "He doesn't consider any other possibility other than what he thinks will happen. I pretty much ran with that."

Swinton plays an angry wife unable to shake her disappointment at being married to a failed spy and lush.

"There's something really, really funny in terms of my character being so angry all the time," Swinton said.

Clooney said the movie - though poking fun at the world of intelligence - has no political intent.

Speaking of politics, wouldn't Clooney, who is planning a fundraiser for presidential candidate Barack Obama in Geneva next month, have preferred to be at the Democratic National Convention in Denver this week?

"I'm sort of happy to be here. It is one of my favorite places," Clooney said. "The stars of the convention should be the people who are being elected."

"Burn After Reading" is playing out of competition for the Golden Lion, which will be awarded on the festival's closing night Sept. 6.