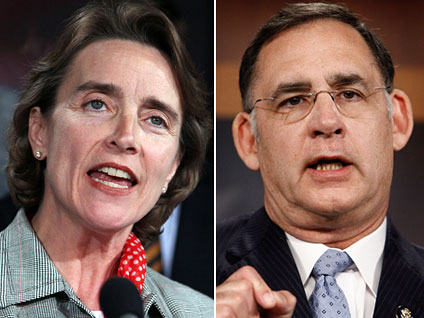 "Last October, just weeks before the presidential election, I wrote a column stating that the acting director of the CIA was suppressing a report to Congress that was potentially embarrassing to President Bush's campaign. The report had been completed by the CIA's own independent inspector general four months before the election, yet the agency rebuffed Congress' request that it be made public.

Now, thanks to last week's release of another report, that of the Bush-appointed Commission on the Intelligence Capabilities of the United States Regarding Weapons of Mass Destruction, we learn that the embargoed CIA report centered on the outrageous case of the now-infamous Iraqi informant known by the code name, "Curveball."

Unfortunately for the American people, we were to an embarrassing extent persuaded to go to war based on the fantasies of this known liar, the main source of the Administration's claim that Saddam Hussein had a functioning biological weapons program. It was Curveball, an Iraqi chemical engineer who defected, who was the inspiration for then-Secretary of State Colin Powell's statements before the United Nations that the United States knew Iraq possessed mobile bio-weapons labs.

Perhaps even more disturbing is the presidential commission's finding that Curveball's unreliability was withheld from the unwitting Powell, even as the Administration was pushing him out onto the world stage to trade his prodigious credibility for world support for the invasion.

Ironically, Powell's UN sales job, which had the U.S. press raving about his statesmanlike bearing and brilliant mind, was aimed squarely at rebutting the conclusions of UN weapons inspectors on the ground in Iraq, who were not finding the weapons and weapons-making facilities that U.S. intelligence agencies had pinpointed.

Yet, as the commission's report makes indelibly clear, the UN inspectors--who exercised extraordinary access in Iraq before the March 2003 invasion--were right. From the aluminum tubes debunked by the U.S. Energy Department to the Africa uranium story debunked by Ambassador Joe Wilson, from the anthrax-laden drone aircraft that White House briefers told senators threatened Florida to Curveball's futuristic-sounding mobile bio-weapons labs that have never been found, Powell and the White House were, as the President's commission has just unanimously concluded, "dead wrong."

The case of Curveball was relevant to the election because it went to the heart of the Administration's competency in managing national security. At best, what emerges from the presidential commission's report is a picture of an American leadership in total disarray on national security; at worst, it shows widespread complicity at the top in a concerted effort to deceive the electorate on matters of war.

Recall that then-CIA Director George Tenet, later rewarded by Bush with the Medal of Freedom, provided the basic briefing and final vetting of Powell's disastrously false presentation of the case against Iraq. According to the commission's report, Tenet was working with Powell the night before the UN speech when he spoke on the phone to a high-ranking CIA official who warned him not to rely on Curveball's information. That warning had been issued by others in the agency, but Tenet claims that he cannot recollect hearing it.

In fact, the CIA had long harbored strong doubts concerning Curveball's veracity. The foreign government holding him had even informed the United States that the Iraqi exile was a "fabricator" who had suffered a "nervous breakdown" and was "crazy." But his words were spirited all the way to the top of the Administration because they conveniently supported its vision to use 9/11 as an excuse to create a compliant Middle East through aggressive use of U.S. military power.

After the occupation of Iraq in spring 2003, the massive U.S. Iraq Survey Group confirmed that Curveball was either hallucinating or lying, finding no WMD or WMD facilities. It turns out the informant wasn't even in Iraq at the time he claimed to be working on biological weapons.

The Curveball case was definitively closed when the CIA gained access to the Iraqi defector in March 2004 and categorically repudiated his story. That was half a year before the U.S. presidential election, however, and clearly the White House didn't want the CIA inspector general to blow the whistle and embarrass the President as he fought for his political survival.

To squelch the exposure of such widespread incompetence and deadly manipulation of national security intelligence is a betrayal of democracy.

By Robert Scheer
Reprinted with permission from the The Nation