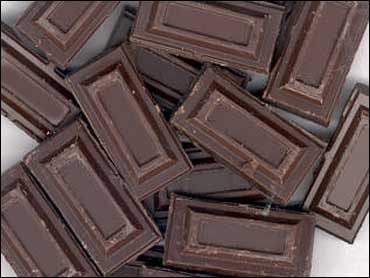 There is more sweet news about chocolate. A cup of cocoa a day may help drive heart disease away, researchers say.

Njike credits flavonoids, a group of antioxidant compounds also found in fruits and vegetables. The more flavonoid-rich foods you eat, the lower your risk of heart disease, he says.

Cocoa and other dark chocolate products are considered one of the most concentrated sources of flavonoids, Njike says.

But go easy on the milk chocolate: Though it too contains flavonoids, fats in milk can raise the risk of heart problems, particularly in overweight people. And white chocolate contains none of the heart-healthy flavonoids, says Robert S. Rosensen, M.D., director of the preventive cardiology center at Northwestern University Feinberg School of Medicine in Chicago.

One of the refreshing things about this is that we so often have to tell patients what they cannot do, what they can't eat, says Rosensen, who moderated a news conference to discuss the findings at the annual meeting of the American College of Cardiology.

Here we can tell them that a favorite mood-improving product can also
improve their [heart] health, Rosensen says.

The study involved 45 overweight or obese people aged 30 to 75. "We chose overweight people because they're at higher risk for cardiovascular disease," Njike says.

The participants drank an 8-ounce cup of sugar-free cocoa, sugared cocoa, or a hot nonfat milk beverage each morning for six weeks.

The cocoa beverage was made with Hershey's Cacao Reserve, which uses a process that helps retain the flavonoids naturally found in cocoa beans. Hershey provided the cocoa beverage and also provided partial funding for the study.

Results showed that the ability of arteries to relax and expand to accommodate increased blood flow to the heart increased by about 39 percent by two hours after people drank the sugar-free cocoa. When they drank cocoa with sugar, it improved by about 23 percent. In contrast, it dropped 12 percent when they consumed the nonfat milk drink.

Rosensen notes that previous studies have shown that improvement in blood flow tends to fade about six hours after eating flavonoid-rich foods. It could be that we're best off eating small cocoa snacks throughout the day, he says.

Despite the findings, the researchers caution against bingeing on dark bonbons. That's because not all chocolate and cocoa products are processed the same. In some cases, commercial producers of cocoa remove flavonoids because of their bitter taste, Rosensen note.

Moderation is key, he tells WebMD.