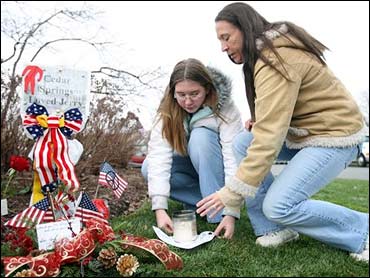 In a state funeral for the president who only wanted to be speaker of the House, Gerald R. Ford's casket will return to the Congress he served on his historic journey to an unelected presidency.

Ford will lie in state in the Capitol Rotunda, where 10 other presidents have been honored. But he also will lie in repose outside the chambers of the House — where he honed his leadership skills — and the Senate, where — as vice president — he served in his constitutional role as the chamber's president.

Ceremonies begin Friday in a California church, followed by a flight across the country Ford sought to heal after the trauma of Watergate and the resignation of his disgraced predecessor, Richard Nixon.

The mourning ends five days later with Ford's entombment on a hillside near his Grand Rapids, Mich., presidential museum.

Funeral details for the nation's 38th president were made public Wednesday. He will lie in state in the Rotunda, where the public and dignitaries will pay their respects.

But the short stops outside each congressional chamber will set tradition aside.

"I know personally how much those two tributes themselves meant to President Ford," said family representative Gregory D. Willard, who detailed arrangements in a news conference in Palm Desert, Calif.

Willard said this "unprecedented historic tribute" was designed to honor Ford's 25 years of service in the House, where he rose to minority leader, and his term as president of the Senate while he was Nixon's vice president.

Ford's goal was to be the House speaker, a position unattainable during his time as Republican leader because Democrats had solid control of the chamber.

Ford, who died Tuesday at age 93, participated in his own funeral planning, as former presidents typically do.

His widow, Betty, said the outpouring of appreciation for the former president's contributions is "more than we could ever have anticipated.

"These kindnesses have made this difficult time more bearable."

The Capitol will intensify its preparations by closing for tours at noon Thursday.

Funeral plans for former presidents are drawn up far in advance and are periodically updated with input from family members and officials, reported CBS News correspondent Tom Foty. The major coordination is by the Army's Military District of Washington.

Events begin at St. Margaret's Church in Palm Desert, which Ford and his wife, Betty, frequently attended. A family prayer service will be followed by visitation by friends and a period of public repose.

On Saturday, Ford's body will be flown to Washington in late afternoon, where another special stop is planned. The hearse will pause at the World War II memorial in joint tribute to the wartime Navy reserve veteran and America's armed forces.

The state funeral will be conducted in the Capitol Rotunda that evening. The public will be admitted to pay respects — sometime after a 6:30 p.m. EST arrival ceremony — and from 9 a.m. to 6 p.m. EST Sunday and Monday.

Ford will lie in state until Tuesday morning, in a closed casket. Then, his casket will be moved to the National Cathedral for a funeral service. Interment will follow the next day in Michigan.

The nation has witnessed just two presidential state funerals in over three decades — those of Ronald Reagan in 2004 and Lyndon Johnson in 1973. Nixon's family, acting on his wishes, opted out of the Washington traditions when he died in 1994, his presidency shortened and forever tainted by the Watergate scandal.

Ford served his Michigan district in the House for 25 years, rising to the vice presidency when scandal drove Spiro Agnew from office and then to the presidency when Watergate consumed Nixon.

One open question was how involved the funeral procession to the Capitol, often the most stirring of Washington's rituals of mourning, would be for a man whose modest ways and brief presidency set him apart from those honored with elaborate parades.

In contrast to Reagan's funeral, Ford will not have a horse-drawn caisson but will travel by motorcade. Ford, historian Douglas Brinkley said on CBS' The Early Show, was a simpler man and that the heart of the funeral ceremonies will likely occur at the National Cathedral.

The Military District of Washington turned to the task quietly but with increasing urgency as Ford went through several bouts of ill health in recent years.

Two presidents are buried at Arlington National Cemetery, John F. Kennedy and William H. Taft. Reagan was buried on the hilltop grounds of his presidential library in Simi Valley, Calif., in a dramatic sunset ceremony capping a week of official public mourning.