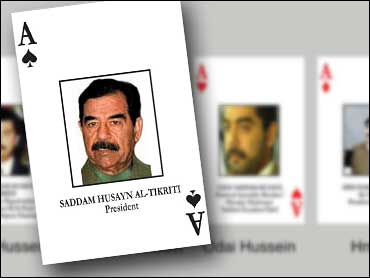 The military is still checking to confirm the men in custody are Baath Party leader Fadil Mahmud Gharib and former culture minister Hammed Youssef Hammadi, the official said, speaking on condition of anonymity.

Gharib was a leader of Saddam's political party in the provinces of Karbala and Babil south of Baghdad. He was No. 28 on the U.S. list of the 55 most wanted former Iraqi officials. He was the three of hearts in the "deck of cards" used to track those leaders.

The United States has captured nearly two dozen of the officials on the list.

Hammadi was not on the top 55 list but could be an important source of information in tracking down artifacts looted or otherwise stolen during the war, the Pentagon official said.

Taha, a scientist who helped Iraq make weapons out of anthrax, surrendered over the weekend, said Maj. Brad Lowell of the U.S. Central Command in Tampa, Fla.

Taha is not on the list of the 55 most wanted Iraqi leaders, but among 200 Iraqis that Defense Secretary Donald H. Rumsfeld has said are sought but who he did not publicly identify.

Pentagon officials did not give details of the detention of Muhammad, Iraq's armed forces chief of staff since 1999. He was No. 11 the most wanted list and the jack of spades.

The two could know much about any unconventional weapons the government had, but it was far from certain what kind of information they would divulge to American interrogators.

Other former senior leaders have largely denied under questioning that the country had programs for biological, nuclear or chemical weapons — the Bush administration rationale for waging the war.

Officials have captured a number of other former officials who they had hoped would give information on the unconventional weapons programs. Last week they reported the capture of Huda Salih Mahdi Ammash, along with Taha one of the rare women among Saddam's circle. Ammash was among the 55 most wanted and a woman officials believe played a key role in rebuilding Baghdad's biological weapons capability in the 1990s.

So far, reports indicate, captured Iraqis have maintained that their country possessed no chemical or biological arms.