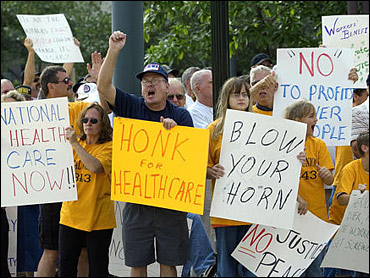 Thousands of coal miners, some sick from black lung disease, will lose their medical coverage under an order filed Monday by U.S. Bankruptcy Judge William Howard.

The judge ruled that Horizon Natural Resources, the nation's fourth largest coal company, does not have to honor union contracts that guaranteed benefits for 1,000 active miners and some 2,300 retirees.

The order sparked an immediate outcry from the United Mine Workers of America, which had staged massive protests on the streets outside Howard's courtroom in downtown Lexington.

"What a complete and utter travesty of justice," said UMWA President Cecil Roberts. "These workers did absolutely nothing wrong. They worked hard, did what was expected and accepted lower wages for the promise of health care, but look where that got them. They've been left high and dry. No health care and no job rights."

Roberts led two protests last month in Lexington, where coal miners and their supporters called for reforms to the nation's bankruptcy laws, which allow companies to void contracts that provide health insurance.

"It is past time for working people to start fighting back and joining together to reform the nation's extremely biased bankruptcy and labor laws," Roberts said. "As I've said often in the past several months, the UMWA stands ready to help lead this fight."

Miners had called for Howard to require Horizon to honor the labor contracts to protect their health care and retirement benefits. They said it was unfair that a bankruptcy judge had the authority to allow companies to shed medical costs and retiree benefits to make them more attractive to potential buyers.

Newcoal LLC, formed by New York billionaire Wilbur L. Ross and four other investors, and several other companies have expressed an interest in buying Horizon's nonunion properties. However, no one has made an offer on any of Horizon's six union operations in Illinois, Kentucky and West Virginia, said Jim Morris, Horizon's vice president for business development.

Morris said financial obligations related to union contracts and the union's retirement plan made them unattractive to potential buyers. The company's assets are scheduled to be auctioned at 9 a.m. EDT on Aug. 17 at the Hilton Cincinnati Netherland Plaza in Cincinnati, Ohio.

Horizon, posting huge financial losses and unable to pay its creditors, filed for bankruptcy in November 2002.

The company's assets, valued at just less than $1 billion, are being sold in an attempt to satisfy about $1 billion in debts and other obligations.

Roberts has said that the UMWA is prepared to take whatever legal action possible to stop Horizon from selling its properties without having to take care of its workers and retirees.

Dwight Siemiaczko, a union worker at a Horizon mine in Cannelton, W.Va., said the nation's bankruptcy laws are out of hand.

I'm hopeful that what is happening to us will spark a national movement to reform America's bankruptcy laws," he said. "Working people across the nation must join this fight."

Roberts said the UMWA will appeal Howard's decision to the U.S. District Court in Lexington.

"I promised every Horizon worker that the UMWA would explore every legal avenue available," he said, "at first, to prevent this injustice, but now to rectify it."