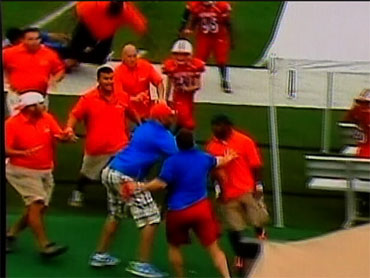 Even pee-wee football can be rough - but a Texas-sized brawl among coaches and parents at a game involving 11- and 12-year-olds is raising eyebrows - over the fight itself - and the punishment the local league has doled out.

The melee in Pearland, some 20 miles south of Houston, was caught on tape by a parent making a home video of the game from the stands.

The ugliness began, reports CBS News Correspondent Jeff Glor, after a player for the Pearland Patriots ran for a touchdown. Two players who collided as the play unfolded began to scuffle.

One parent stepped in, followed by many, many more. Before long, a wave of angry dads streamed toward the field, pushing, shoving, punching - and coaches from both sides got into it.

"I still can't believe the coaches actually did that in front of us, because that's a bad example for us," one player, Justin Robinson, told CBS News.

In a particularly egregious moment, a Patriots coach blindsided a father from the other team with a sucker punch to the back of the head - even as one of the young players nearby tried to play peacemaker, encouraging the adults to settle down.

Fans watched, stunned. "Shock," is the way one parent, Kim Edmonsond, described it to CBS News, "And I (was) just waiting, hoping that it (was) gonna end any minute."

Now, says Glor, there's even more anger and frustration - over a decision by the local football league -- which has banned both teams from postseason play, even though it's pretty clear the parents were responsible for elevating a rough tackle between kid into an all-out brawl among adults.

Says Robinson, "I don't think it's fair that they punished us for what the coaches did."

The league's executive board was slated to meet Wednesday night. Parents and players say they'll try to get the board to change its ruling about their eligibility for postseason play but, for now, the league says it's final.

One coach resigned, then was banned for life by the league. Other coaches have been barred for the rest of the season.

Click on the video below to see Glor's report: