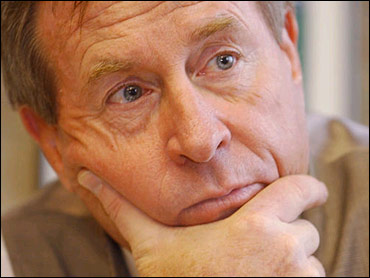 The University of Colorado suspended its football coach for his comments about a female player who accused a teammate of rape, and police said they are investigating a sixth alleged sexual assault involving a school football player.

Boulder Police Chief Mark Beckner said Thursday that the latest case to surface in the school's burgeoning athletics scandal occurred in August 2001, but he would not immediately discuss details. He said a police report would be released later Thursday.

Barnett will remain on leave until the university completes its investigation by the end of April, reports Rick Sallinger of CBS station KCNC.

In a hastily called, late-night news conference in Denver, university President Elizabeth Hoffman said she was distressed by recent comments the coach made about women who have come forward claiming they were raped.

Barnett, who was hired in 1999, said he disagreed with Hoffman's decision but accepted it, calling himself "a team player." He apologized for his remarks, but said they had been taken out of context or misinterpreted.

Barnett's suspension came one day after he criticized the on-field performance of former Colorado kicker Katie Hnida, who said she was raped by a teammate. The coach called her an "awful" player and said she couldn't "kick the ball through the uprights."

Hnida, who now plays for the University of New Mexico, last year became the first woman ever to score points in a Division I-A college football game.

Ryan Johanningmeier, who was a team captain while Hnida played at Colorado, said Thursday some teammates could be "a bit nasty."

Johanningmeier said that when one player's comments about Hnida got too personal, Barnett "gave this guy a pretty good reprimand in front of the team, reminded us once again that this was a player on the team who needs to be treated with respect. A lot of it stopped at that point, from what I saw."

Hoffman called Barnett's Tuesday comments "extremely inappropriate and insensitive," and said they were the main reason he was put on administrative leave. "Rape is a horrific allegation and it should be taken seriously," she said.

After spending much of Wednesday commenting about Barnett's remarks, Hoffman learned police had released a report that quoted an unidentified woman saying Barnett told her he "would back his player 100 percent" if her rape allegations were pursued. The woman declined to file charges.

Accusations involving the football program have surfaced over the past three weeks, stemming from civil lawsuits filed by three women against the school. They said they were raped by players or recruits at or after an off-campus party in December 2001.

An adult entertainment company then said football players regularly hired strippers for recruiting parties, and the university acknowledged that an escort service was called from a cell phone that had been assigned to a former football recruiting aide.

The university formed an independent investigative committee this week to look into the accusations, with the goal of issuing a report on April 30. Hoffman also said she would hire an administrator to oversee athletics, reporting directly to her and Chancellor Richard Byyny.

University athletic director Richard Tharp supported the decision to place Barnett on leave, saying the remarks "were both inappropriate and insensitive in the context of her allegations of sexual assault and harassment."

Hnida told Sports Illustrated that she was assaulted in the summer of 2000 at the home of a teammate while attending Colorado. Asked why she didn't tell police, she said she was afraid of the player and didn't want a "media mess."

Barnett snapped at a reporter Tuesday who asked him about her abilities. "It was obvious Katie was not very good. She was awful," he said. "Katie was not only a girl, she was terrible. OK? There's no other way to say it."

During a brief news conference in Boulder late Wednesday, Barnett apologized "for answering that question in a manner where I must have come across as insensitive."

Hoffman, who was not present for Barnett's press conference, said the coach "was not apologetic" when she discussed his remarks with him earlier. "It was my feeling ... that he did not understand the seriousness of the comments he had made the day before," Hoffman said.

Gov. Bill Owens, who had warned the university to get to the bottom of allegations of sexual misconduct in the football program, said he agreed with Hoffman's decision.

"In view of the serious allegations concerning the CU football program, the action taken this evening by President Hoffman is both appropriate and necessary," Owens said in a statement.

But some women's advocates sought more action. Regina Cowles, president of the Boulder chapter of the National Organization for Women, said Barnett and Tharp should be fired.

"I'm perplexed as to what it will take for CU to finally figure out that the coach and athletic director has to go. It is just amazing to me that they are both not gone," said Cowles.

Barnett was hired to coach Colorado's football team five years ago with the goal of ending an era of loose recruiting practices and return the team to national prominence.

During the last two seasons, nine players were suspended for various violations of team rules, including curfew and behavior standards. Barnett's contract runs through 2006.