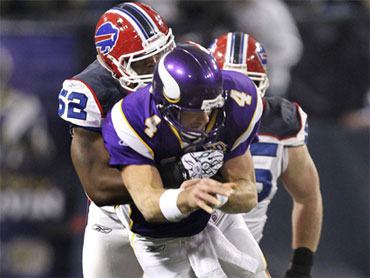 If Brett Favre can throw, he'll go. Near the end of his 20th NFL season, Favre has created a consistent expectation that he'll play each weekend regardless of what kind of malady he might be dealing with. Earlier this season, it was a pair of fractures in an ankle. This time, it's a sprained joint in his right shoulder.

"From what I've been told, rest is probably key," Frazier said Monday. "That's going to be number one, and they'll do some exercises with him to help him as well. But it's not something that can surgically be attended to. It's just a matter of rest and then the rehab that they're going to put him through."

Frazier said Favre will be under constant evaluation. It's yet to be determined whether he'll practice.

"When we go through the week, just seeing how his throwing motion is and what he can and can't tolerate," Frazier said.

The 41-year-old Favre can tolerate a lot, but he couldn't bear enough to get back on the field in Sunday's win over Buffalo after he was flattened on his first pass.

"I really thought he'd come back in the game, just knowing Brett," Frazier said. "As hard as I saw him get hit yesterday, I've seen him take harder hits and bounce back and come back and play. There's nobody tougher than Brett Favre to ever play the quarterback position."

Favre declined to comment Monday when he walked through the locker room, but he said after the game Sunday he wasn't sure about his status. He also acknowledged uncertainty about a new injury.

"We'll see how it responds to treatment," Favre said.

Frazier said he won't weigh the streak over Favre's safety or the sake of the team's success.

"If the medical people tell me he's clear and he feels comfortable, he'll play," Frazier said, adding: "The streak really doesn't come into play. Brett's got to be honest about where he is. I really trust him in that regard. If he can play, he'll tell us. If he can't play, he'll tell us."

After falling to 3-7 and seeing Frazier take over two weeks ago when Brad Childress was fired, the Vikings have found themselves back in the playoff picture after giving their aspiring head coach two consecutive victories.

Though they're not yet mathematically eliminated from contention, their best-possible 9-7 record is unlikely to be good enough for postseason qualification. Instead, it's their next three opponents - the New York Giants, Chicago Bears and Philadelphia Eagles - who are all in the thick of the race.

The Vikings will have a hand in who makes it, even if they're a long shot themselves. Frazier said he doesn't believe the team became complacent or self-entitled, but the Vikings have simply been playing the way they envisioned.

"We can feel it," linebacker Ben Leber said. "The energy is definitely great. We've been having some great practices these last couple of weeks, and I think the hard work is really paying off."

Improvement has been made on both sides of the ball, beginning with a revived pass rush led by All-Pro Jared Allen. Part-timer Brian Robison started at defensive end for Ray Edwards (sprained ankle) and played the run well to go with consistent pressure. Rookie Chris DeGeare filled in at left guard for injured All-Pro Steve Hutchinson (broken thumb) and did, by all accounts, a decent job.

Tarvaris Jackson, despite three interceptions, one that was returned for a score, threw two touchdown passes and helped lead the Vikings to a season-high 38 points. In fact, they had four touchdowns in the first 22 minutes against the Bills, more scoring than in any other game this year.

"It was just a collective effort," tight end Visanthe Shiancoe said. "We feed off of each other."