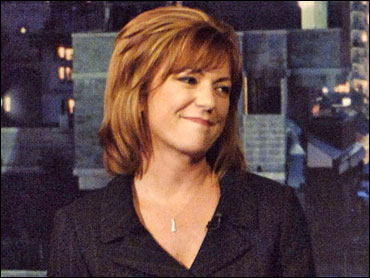 CNN's Kyra Phillips, embarrassed Tuesday when an open mic in the ladies' room turned some private comments into a soundtrack to a live speech by President Bush, poked fun at herself Thursday in an appearance on CBS' "Late Show with David Letterman."

Tuesday, Phillips apologized to viewers by calling her the snafu during Mr. Bush's Hurricane Katrina anniversary speech "an issue we had with our mikes" and "a little bit of an interruption there during the president."

CNN, in its own statement, also referred to "audio difficulties" and apologized to "viewers and the president." Calling the mishap "a technical malfunction with the audio board," the network said it is "addressing how this happened and why it was not more promptly corrected on air."

9. "Larry King told me he does this all the time!"

8. "How was I supposed to know we had a reporter embedded in the bathroom?"

7. "I honestly never knew this sort of thing was frowned upon."

4. "Like you've never gone to the bathroom and had it broadcast on national television?"

3. "I just wanted that hunky Lou Dobbs to notice me."

1. "You have to admit it made the speech a lot more interesting!"

No argument there from the many viewers of CNN's "Live From..." who heard Phillips – first live, and then later on web sites including YouTube - unwittingly upstaging President Bush's Tuesday speech with an on-the-air analysis of her husband and her brother's wife.

Unaware that her wireless microphone was live while she was chatting in the ladies room at the network's broadcast center in Atlanta, Phillips' voice came in loud and clear over the sound of the Bush speech in New Orleans.

Viewers were left scratching their heads, wondering exactly who was speaking and why, and soon realized from the nature of the woman's comments that there was no way they were intended to be overheard, let alone be a second soundtrack for the presidential speech.

The voice that would later be revealed as Phillips, chatting with another woman – still unidentified - in an echo-filled room dismissed most men with a vulgar term but called herself "very lucky in that regard. My husband is handsome and he is genuinely a loving - you know, no ego - you know what I'm saying? Just a really passionate, compassionate, great, great human being. And they exist. They do exist. They're hard to find. Yup. But they are out there."

A few moments later, she observed that "brothers have to be, you know, protective. Except for mine. I've got to be protective of him."

Why? "His wife is just a control freak."

At that point, another voice cut in: "Kyra."

CNN anchor Daryn Kagan, looking flustered, then broke into the telecast with a recap of what President Bush had been saying.