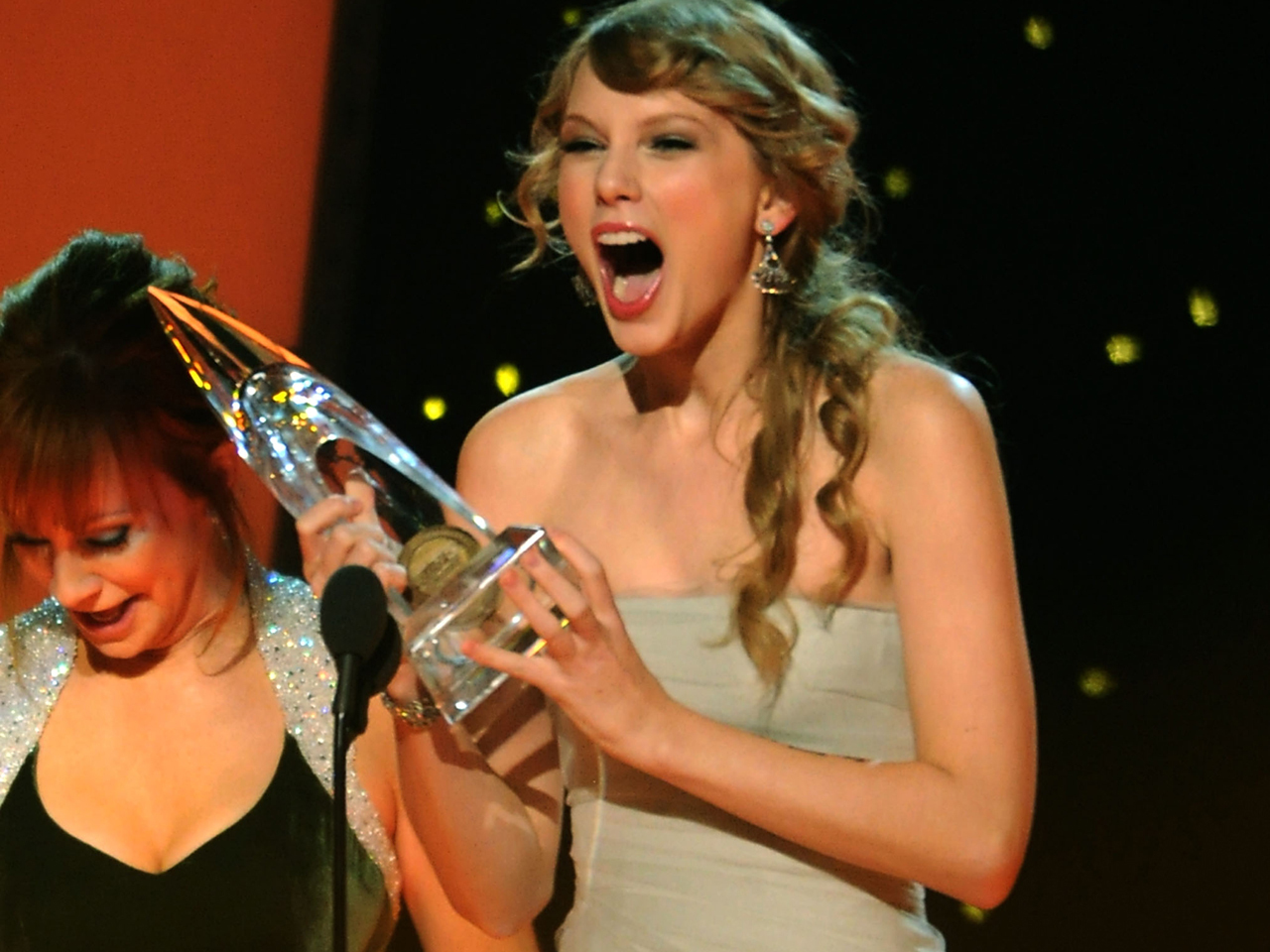 Swift leaped from her seat with her arms in the air and jumped up and down before hugging her mother and good friend Tim McGraw.

Swift is now the second woman to win entertainer of the year twice at the CMAs, joining Barbara Mandrell. She beat out Blake Shelton, Jason Aldean, Brad Paisley and Keith Urban for this year's title.

Aldean won his first major awards at the CMAs, taking album of the year for his platinum-selling "My Kinda Party." That album included "Don't You Wanna Stay," his duet with Kelly Clarkson, which won musical event of the year.

The Band Perry won single and song of the year for their surprise breakthrough "If I Die Young," and also picked up the best new artist award.

"It's just always felt like a song that was meant to be here," Kimberly Perry said as she was flanked by brothers and bandmates Reid and Neil Perry. "I was so excited to have a pen and paper in hand when it was ready to come to Earth."

Shelton and wife Miranda Lambert repeated their male and female vocalist of the year honors. Lady Antebellum won vocal group of the year, Sugarland won vocal duo of the year and Kenny Chesney and Grace Potter took home video of the year, for their steamy "You and Tequila."

Hank Williams Jr. made an unexpected appearance during the opening skit Wednesday night with hosts Brad Paisley and Carrie Underwood, who lampooned his recent troubles with ESPN and his "Monday Night Football" theme song. Paisley brought out an acoustic guitar and began his own version of "All My Rowdy Friends Are Coming Over Tonight."

"Are you ready for an awards show?" Paisley sang before Underwood warned him he might draw Williams' ire.

As they spoke, Williams quietly walked up behind the hosts to the roar from the crowd. Asked if he wanted to say something, Williams said, "No," to the delight of the audience.

It was just one of several laugh-out-loud moments for the hosts, who trotted out Barbies of McGraw and Hill after Williams left the stage. They also poked fun at Justin Bieber's baby drama and Kim Kardashian's short-lived marriage.

Shelton and Kenny Loggins opened the show with a high-energy version of Loggins' hit "Footloose," quickly establishing a theme for what would be a very eclectic night.

Lionel Richie made his first appearance at the awards since 1986, singing selections from his new country duets album with Rascal Flatts, Darius Rucker and Little Big Town. Gregg Allman joined Zac Brown Band on "Georgia on my Mind." Natasha Bedingfield, in a dress that featured a fluffy red skirt, joined Rascal Flatts on stage to perform their duet "Easy."

All five entertainer of the year nominees took to the stage and performed. Faith Hill also debuted a new single, "American Idol" winner Scotty McCreery took to the stage in front of millions of viewers again and Potter and Chesney performed "You and Tequila."