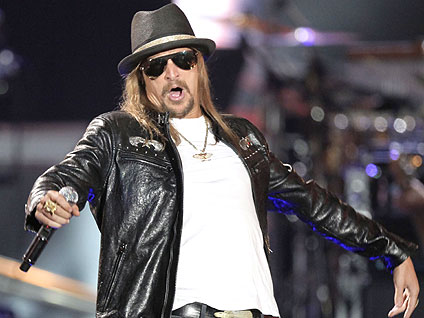 NEW YORK (CBS) "Ain't no party like a Kid Rock party." The rap-rock-country boy made good in his turn as host of the CMT Awards June 9 in Nashville.

Last night's CMT stage may as well have been a billowy pool hall as Kid Rock, 39, smoked and drank his way through the show.

Rock kicked off the night by performing a medley of his signature tunes "Cowboy" and "Bawitdaba," with the melody of the "Dukes of Hazzard" theme, "Good Ol' Boys" tossed in the stew.

He described Lady Antebellum as "the hillbilly Fleetwood Mac." Adding "I suspect they don't do drugs or sleep with each other."

Although Rock was unabashedly tipsy, he made sure no Kanye West-shenanigans went down on his clock (alluding to the rapper's infamous Taylor Swift interruption at the MTV awards last fall). "Anyone thinking about grabbing a mic, myself or Bocephus will personally punch you in the mouth, all right?" said Rock. "We might even get Trace Adkins on the deal."

Though there were some minor slip-ups, as when Rock introduced Reba McIntire only to bring out "Saturday Night Live" comedian Kenan Thompson (who eventually teamed with Reba), he proved a good host.

During the closing, as Kid Rock presented the final award of the night with his "Picture" duet partner Sheryl Crow, he asked: "Will you just have my baby and let's get it over?"

"If it's a girl, maybe," replied the single mom, who had just adopted her second son.