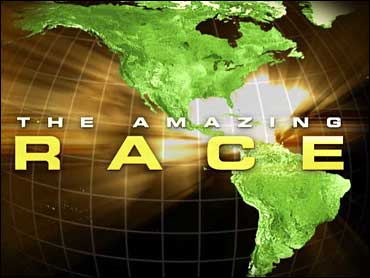 A couple of clowns were causing a ruckus on The Early Show plaza Thursday. You may recognize the jesters; they are also reality TV stars.

Jon Weiss and Al Rios, the popular "Team Clown" eliminated from from "The Amazing Race" on CBS were there to promote the season finale Thursday night.

Weiss told The Early Show weatherman Dave Price, "All the teams that are there are deserving. It's going to be an exciting show tonight."

They said watching themselves on TV has been quite an experience. Weiss noted, "The 11th leg, when we were eliminated, is not as hard as when we watch the show and we're not on it."

Rios had already spent the million dollars in his mind.

He explained, "First I was going to pay for my college and a big vacation in Aruba or something like that."

Weiss added, "I had some college funds picked out for the kids, maybe investment for retirement - some sort of home."

Weiss and Rios are clowns with The Greatest Shown on Earth. So Price asked them if had they had won the race, would their work at the circus be over.

Weiss said, "Well, you never know what you're going to do. I truly enjoy working for The Greatest Low Show On Earth. I don't want to speculate what I'd do, but I do enjoy my work."

As for The Amazing Race, Rios and Weiss agree it is one of the brightest, smartest reality programs on television. It actually got a Emmy nomination for Outstanding Reality/Competition Program.

Speaking about their team, Weiss says, "I think the highlight was when Al had to go under the frozen ice and swim 30 feet and come out the other side. That was drama. That's real life. It's danger. It's mental because you have to get into freezing water. Otherwise you have to warm up your body. Half his face is purple. It's great."

"The Amazing Race" season finale airs Thursday night at 8 p.m. ET/PT. And on Friday, don't miss The Early Show's interview with the winners.