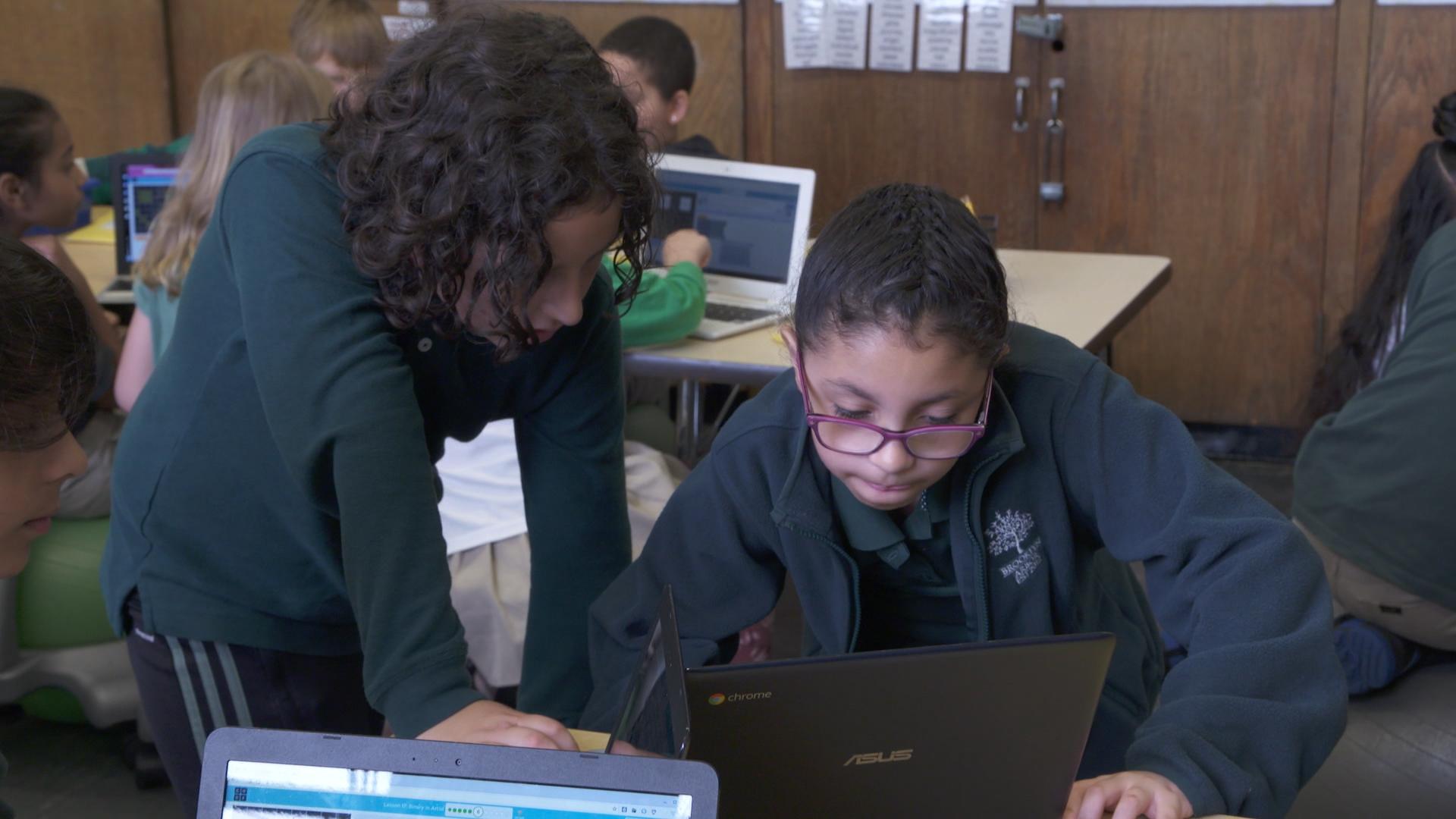 There are half a million open computing jobs in the United States right now, new ones are being created at nearly four times the rate of other kinds of jobs, and they pay almost twice as well.

The problem is, the people in a position to get those great jobs are overwhelmingly male. Women occupy just a quarter of computing jobs.

It's not a new issue. Companies, universities and foundations have spent years and millions trying to attract women to tech. But the number of women majoring in computer science has actually declined.

We wondered why those efforts have failed, and found one group that may have a chance to finally crack the code.

Teacher: "What is the activity going to be about?"

These third-graders in Brooklyn are studying the binary-code basics of computer science. Boys and girls are engaged and excited in equal numbers.

But jump up 15 or 20 years, look in almost any computer company, and the girls are mostly gone. It's men, men, and more men.

Bonnie Ross: Boys and men, the numbers are moving up. We are getting a lot more into computer science. But with women and girls, it's going down.

Bonnie Ross is a corporate vice president at Microsoft, and runs its videogame studio that produces the blockbuster game "Halo." As a rare woman in a tech-sector leadership position, she's determined to recruit more women for her team.

Bonnie Ross: In many times there's not even a way where I could bring a woman into a specific job because the candidates are just not there.

Sharyn Alfonsi: You can't find them.

Sharyn Alfonsi: Is it that you're--

Sharyn Alfonsi: --not looking around enough, or they're just not there?

Bonnie Ross: They're just not there.

On the day we met her, she told us there were 4,000 current job openings at Microsoft alone. So the few women candidates with computer science degrees are as heavily recruited as star athletes.

Bonnie Ross: On the interns that we have, where we're offering them-- hiring positions, they have offers from five to seven other top tech companies.

Sharyn Alfonsi: Your interns are-- have five or seven offers by the time they leave?

Bonnie Ross: It's amazing. Yes. These women, basically they open every door because we all want them, and there's so few of them, and they're amazingly talented. There's just not that many of them.

Hadi Partovi: It's a chicken/ egg problem. There's not enough women going into the field. And because the field is so male dominated, it doesn't make women comfortable. And both problems hurt each other.

Hadi Partovi was born in Iran, where he taught himself to code as a kid. After immigrating to the U.S., he began his career at Microsoft, then founded two tech startups and made a fortune in Silicon Valley. His biggest mark may be with his current project, a non-profit called Code.org, which may finally help close the tech-skills gender gap.

Hadi Partovi: We now have over ten million girls coding on Code.org.

Its audacious goal is to teach computer science to every student in America from kindergarten through the 12th grade, with online lessons that begin with the simplest concepts of computer science.

Sharyn Alfonsi: It looks like games. But what are they really learning?

Hadi Partovi: First of all, is just putting commands together to build a really basic program. A computer program is a lot like-- a cooking recipe. You know, and a simple recipe could say, you know, crack an egg, put it in a pan, light a fire and cook it. And more complicated recipes have a lot of preparation. But you start with something simple.

Over time, students learn to build apps, create websites, and write computer programs, which is essentially what all those guys in all those tech jobs do for a living.

Hadi Partovi: In the current workforce, the gender gap hasn't changed. In fact, it's gotten slightly worse-- over the last ten years.

Hadi Partovi: Well, many of the efforts to get women into computer science, I think, start late. And, if you start-- by the time somebody is 18 or 19, they have so many more predeveloped stereotypes and inhibitions and-- and other passions that they've, at this time, developed.

As he says, college or even high school is way too late, because of what's known as "the middle school cliff," a very well-documented decline in girls' interest in science, technology, engineering and math - the so-called "STEM" subjects.

Hadi Partovi: Middle school is roughly when-- girls traditionally drop out of STEM fields. And for computer science, they've not-- not even been exposed to it at that young age in many cases. And that's when we need to start.

Code.org gets girls interested when they're even younger, starting in kindergarten. And because its goal is to teach computer science to every kid, it has the potential to change the face of the tech workforce.

Hadi Partovi: The majority of our students are girls or underrepresented minorities. In the code.org classrooms, whites and Asian males are the minority. There are only about 30 percent white and Asian males. Seventy percent are girls or black or Hispanic or Native American students.

Sharyn Alfonsi: Is that by design --

Hadi Partovi: That's totally by design. We-- we started this to, basically, equalize things. And we're almost at perfect-- population balance in our classrooms.

One of the biggest challenges Code.org has faced is finding enough teachers for all those classrooms.

Sharyn Alfonsi: Is it true that we only graduated 75 computer science teachers last year from all of the universities and colleges in the United States?

Sharyn Alfonsi: How is that possible?

By contrast, in just the five years since it was founded, Code.org has trained 75,000 teachers.

Hadi Partovi: And these aren't computer scientists. These are English teachers and science teachers and history teachers. They just realize my kids aren't gonna ever learn this if I don't teach it. So they've just decided I'm gonna go up to Code.org, find their curriculum and just start teaching it.

That's exactly what Alexis Dixon did.

She teaches 4th grade at the Brooklyn Arbor Public School in New York, and says it was a visit to a friend working at Facebook headquarters that motivated her to teach computer science.

Alexis Dixon: I looked around and I saw the lack of women and diversity on the campus. And so if I can get the students that I have currently to fill those positions at Facebook and be the future, and create their own companies, then that will help, like, change this entire field. And that feels really, really powerful.

Sharyn Alfonsi: Was it intimidating at all at first?

Alexis Dixon: Oh, definitely. (LAUGH) Yeah, definitely. Not knowing what it was, not knowing really what computer science is, is very intimidating, and feeling like I might not know the answers.

Sharyn Alfonsi: It sounds crazy to say you don't need to be a computer scientist to teach computer science. Don't you? Shouldn't you be? (LAUGH)

Hadi Partovi: We provide the lesson plans and the curriculum and video lectures. And the kids, not only, are learning, they love it. This is something that if the teacher wants to do it, they can do it.

Code.org believes it can train just about anyone to teach computer science.

Hundreds of middle and high school teachers come to its free week-long sessions during the summer. The biggest companies in tech provide Code.org with the bulk of its funding, and their founders help teach the online lessons.

Sharyn Alfonsi: So where are we now? What percentage of kids in the United States are learning computer science?

One reason they've reached so many kids so quickly is that a lot of the lessons, especially for younger kids, are taught through play.

That play-based problem-solving appears to be especially effective with girls.

Alexis Dixon: Many lessons have introductory videos where they might have someone who is a dancer that uses technology in her routines. And so, if someone that loves dancing is like, "Oh, wait, I don't have to just sit in front of a computer-- I can use it and combine my passion with computer science."

Sharyn Alfonsi: It doesn't have to be a lonely--

Sharyn Alfonsi: --person in front of a terminal.

Bonnie Ross of Microsoft says that connecting a sense of fun and creativity to computers and technology is crucial to getting and keeping girls engaged.

Bonnie Ross: Yeah, it's interesting. And research that we've done at Microsoft of the girls we've talked to, 91% of them feel that they are creative, they identify with being creative. But when asked about computer science, they don't see computer science as creative. And so I think that we do need to connect the dots. Because it is incredibly creative, it's just that we're not doing a good job of showing them what they can do with it.

At Marymount Girls School in New York, they're making that connection to creativity using electronic building blocks called littleBits, think Legos with built in circuits, to play and experiment.

Sophia: I made a robot. So, when you open this up, in the inside--

Sharyn Alfonsi: What's in there?

Sophia: So, there's a circuit in here, and it's basically a motor, and a few other things. And then, so, if you-- have-- have like a bad day or something, and you need a hug, you just press this button--and its arms will give you a hug. And then--

Sharyn Alfonsi: Are you kidding me?

Sophia: --all you have to do is just keep pressing it, and they'll go back down.

By the time the girls at Marymount get to 8th grade they are using more sophisticated circuit boards and writing computer code to create robots with dance moves.

Madeline: I fell in love with the part of it that was making stuff and hands-on projects. And I said, "I wanna do this. I wanna do this for the rest of my life."

Samantha: Science is my favorite subject. I love to create. I like inventing things. I like playing around with computers, technology and physics.

Sharyn Alfonsi: You guys know that the-- there's a shortage of women in these fields, What's your reaction that there's not that many women?

Samantha: It makes me wanna change that. Like, I am GOING to be one of those women.

We went to a tech job fair in New York recently. It was a sea of men. Just about the only women on hand were those recruiting for tech companies. That picture hasn't changed in decades, but it might be about to.

Sharyn Alfonsi: You think you can do it?

Hadi Partovi: I think if we look at this in about 5, 10 years, the gender gap in university computer science will be gone.