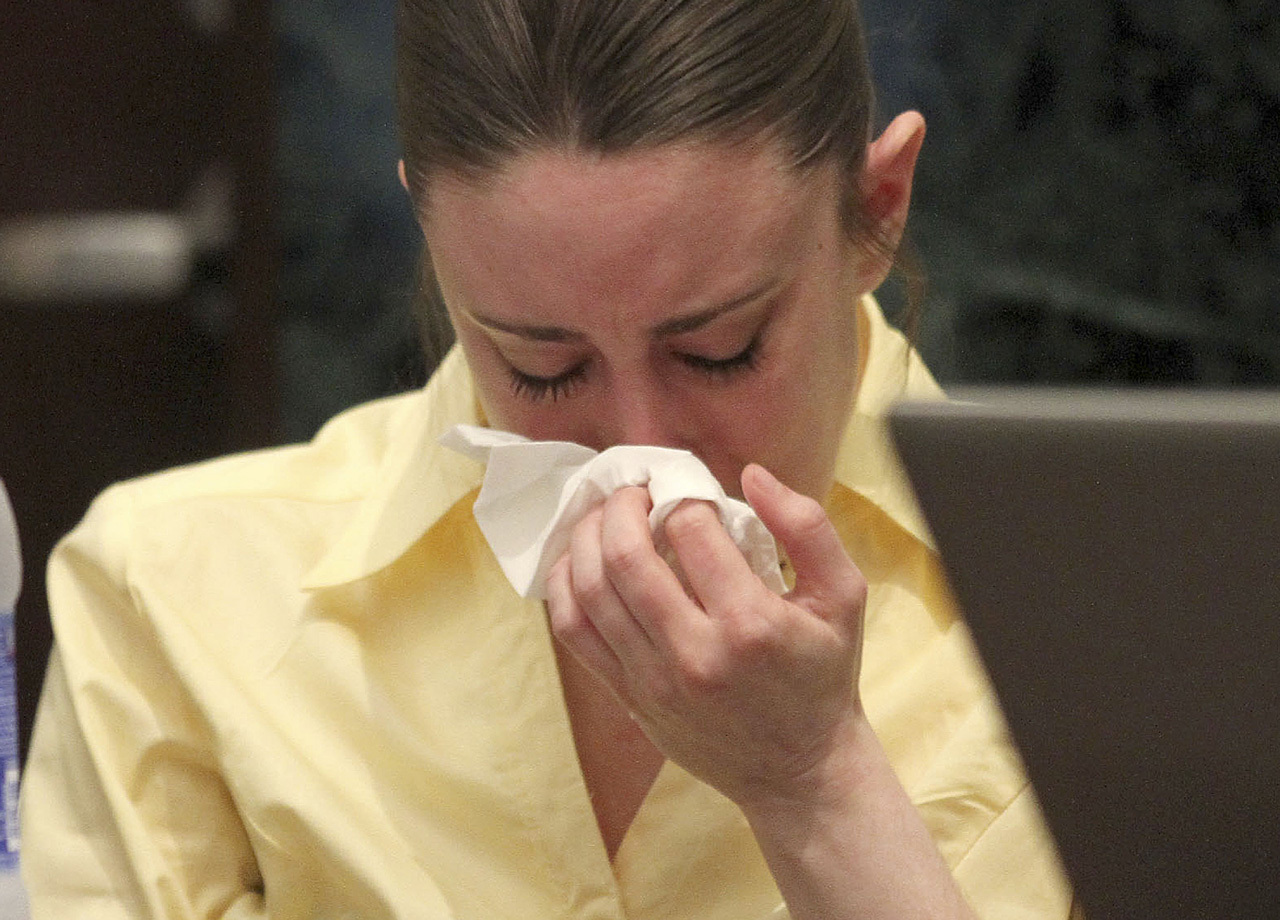 ORLANDO, Fla. — Casey Anthony briefly broke down crying Sunday as prosecutors told jurors during closing arguments that she murdered her 2-year-old daughter Caylee because the child prevented her from having a relationship with a club promoter.

Prosecutor Jeff Ashton said Anthony wanted a relationship with her boyfriend, to go out with her friends and to live the carefree life she had before Caylee's birth.

"Something needed to be sacrificed, that something was either the life she wanted or the life thrust upon her. She chose to sacrifice her child," Ashton said during his 90-minute argument.

Prosecutors contend Caylee was suffocated with duct tape by a mother who then crafted elaborate lies to mislead investigators and her parents. Defense attorneys countered that the toddler accidentally drowned in the family swimming pool, and that her mother in fact was hiding emotional distress caused by alleged sexual abuse from her father. Her father has denied that claim.

Judge Belvin Perry ruled Sunday morning that there was no evidence of such a claim and that the defense could not allude to it in closing arguments. But Perry did say the defense could again present the drowning theory because there "is a reasonable inference that can be drawn" to suggest it.

Defense attorney Jose Baez began his closing argument by telling jurors they have more questions than answers, including the biggest: How did Caylee die? Neither prosecutors nor the defense have offered firm proof of how Caylee died.

"It can never be proven," he said. That alone should give them reasonable doubt that Anthony killed her daughter, he said.

He said the prosecutors' case is so weak they tried to portray Anthony as "a lying, no-good slut."

"Then you'll start to look at this evidence in a different light, you'll start to, wait a minute, maybe I'm seeing something that's not there and start to actually discriminate against her rather than give her the standard that is afforded to each and every citizen in our country," Baez said, noting that the state must prove its case beyond a reasonable doubt.

He said prosecutors' forensic evidence was based on a "fantasy." He said the prosecution's air analysis of the trunk of Anthony's car, which allegedly showed air molecules consistent with decomposition, could not be duplicated. He said no one could prove a stain found in the trunk was caused by Caylee's body decomposing there. And witnesses showed maggots found in the trunk came from a bag of trash that was found there, he said.

"They throw enough against the wall and see what sticks. That is what they're doing ... right down to the cause of death," Baez said.

Earlier during Ashton's argument, Anthony appeared mostly stone-faced for about the first 45 minutes, but then she closed her eyes and rested her chin on her hand. She began to cry when Ashton said that the story that Caylee drowned was also false.

Ashton said Caylee's death wasn't an accident because three pieces of duct tape were placed on her face — one on the mouth, one on the nose and one over those to be "thorough."

The jury is expected to begin deliberating after the defense finishes its closing argument. Perry said those deliberations will continue Monday on the July Fourth holiday if necessary.

The case has played out on national TV since Caylee's disappearance in the summer of 2008 and continued through her mother's trial, with spectators traveling from all over the U.S. to jockey for coveted seats in the courtroom gallery.

Ashton began his closing argument by showing a video of Anthony playing with Caylee, causing Anthony to apparently choke back tears. But she quickly regained her composure.

He then told the jury that Anthony worried Caylee was getting to the age where she would have told Anthony's parents that the woman was spending her days and nights with her boyfriend — not going to work and leaving Caylee with a nanny.

He then described the lies Anthony told her parents, George and Cindy Anthony, about why she couldn't come home and why she couldn't produce Caylee after the toddler was last seen June 16, 2008. That she was with a nanny named Zanny, a woman who doesn't exist. That Anthony and her daughter were spending time in Jacksonville with a rich boyfriend who doesn't exist. That Zanny had been hospitalized after an out-of-town traffic accident and that they were spending time with her.

It only fell apart, Ashton said, a month later when a junk yard told George and Cindy Anthony their daughter's car had been towed. When they picked it up, they discovered a foul odor — George Anthony, a former police officer, and the tow yard operator said it smelled like human decomposition.

Cindy Anthony then tracked down her daughter. When she couldn't produce Caylee, her parents called police. Casey Anthony then told investigators she worked at Universal Studios theme park as an event planner. She went so far as to take them there, talk her way past security, take them to an office building and only give up the lie as she was walking down the hall.

Ashton then attacked the defense contention that Caylee drowned and that George Anthony helped Casey Anthony cover it up. No one faced with an accidental drowning would do that instead of calling 911, Ashton said.

Casey Anthony has pleaded not guilty to first-degree murder. She could face a possible death sentence or life in prison if convicted of that charge.