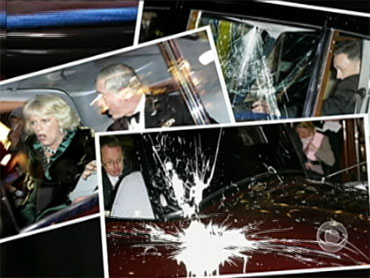 The uproar over a close call for Prince Charles and his wife, Camilla, continues in Britain.

The royal couple narrowly escaped injury when their car was attacked by a group of protesters Thursday.

The attack on Charles' and Camilla's car occurred as they were on their way to a royal gala and lasted only a couple of minutes. Nobody was hurt.

But the effects of that attack are still dominating public discussion in England, Phillips observes.

Police say they had checked and cleared the route moments before the royal Rolls Royce rolled up.

But somehow, they missed the roving mob of protesters that had split from a main demonstration and was creating havoc on London's main shopping streets.

That, notes Phillips, may have been more street theater than real, "but the security issues are real enough. Prince Charles and Camilla were clearly exposed. The results could have been a lot worse than a smashed window and some paint on an expensive, if inappropriate for the circumstances, car."

"The protection officers were placed in a very difficult position," said London Metropolitan Police Chief Paul Stephenson. "Their job was to get them to a place of safety."

But, says Phillips, questions are now being asked about why the heir to the throne and his wife were where they were in the first place; whether police communications were good enough; whether having such high-profile establishment figures cruising the streets of London during a violent demonstration was a good idea; and, of course, what the implications are for the wedding of William and Kate.

They want it to be a big national street party, Phillips points out but, "The national mood right now, is sour. And gangs of the disaffected and the angry have already proven they can spoil the party."

An investigation is under way.

It turns out, as well, that the police party protecting the royals was armed and, according to some reports, within seconds of reaching for its guns.

"This could have been a lot uglier," Phillips concluded.