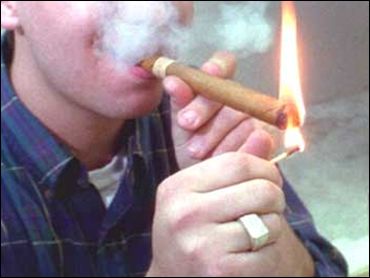 A judge has ruled that a suburban topless bar does not qualify as a cigar bar exempt from the state indoor smoking ban just because 10 percent of its revenue comes from tobacco sales.

The owner of Diamond Dolls in Salina sued the Onondaga County Health Department in August after it was denied the exemption from the Clean Indoor Air Act, which generally requires a smoke-free workplace.

Only one bar in the county, Awful Al's in Syracuse, is a cigar bar with smoking permitted, Health Commissioner Dr. Lloyd Novick told The Post-Standard.

Diamond Dolls owner Ken Rubin claimed he met the only cigar bar criteria the state Legislature established because 10 percent of his 2002 gross revenue came from cigarette sales, even though the club doesn't actually sell cigars.

Acting State Supreme Court Justice James McCarthy ruled that fact does not transform the adult establishment into a cigar bar.

Rubin said an adult entertainment bar in Buffalo has been registered as a cigar bar, and he is considering an appeal.