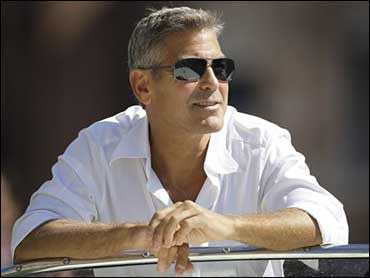 Anyone would call it a coup to get George Clooney and Brad Pitt in the same place at the same time, what with Pitt's schedule now including the care of newborn twins.

The pair will appear together not once, but twice, at the Venice Film Festival - first Tuesday night at a fundraising event for their charity Not On Our Watch. They'll be back on the red carpet Wednesday when the Coen brothers film "Burn After Reading" opens the 65th edition of the festival, which runs through Sept. 6.

Not On Our Watch has raised more than $7 million to help victims both of the humanitarian crisis in the Darfur region of Sudan and the cyclone in Myanmar, also known as Burma, according to executive director Alex Wagner.

The charity, which was launched last year by the stars and some of their "Ocean's Thirteen" colleagues, uses their celebrity appeal to bring attention to human rights abuses, but it isn't so easy to get even two of the founders together because of filming and family demands, Wagner conceded.

"Scheduling is very difficult. Two of them happened to be in Venice at the same time because of the 'Burn after Reading' premiere ... so there was a brainstorming session," she said.

Clooney will discuss the issues and where the charity puts its money at the fundraising dinner on Venice's Giudecca island, which will be attended by some 200 industry insiders and Italian VIPs, Wagner said.

Among the group's donations was a $500,000 grant in March to keep helicopters and airplanes flying aid into Darfur - topping off a $1 million donation a year earlier for the same program.

"We sent out a press release one day saying we were on the verge of closing it down and the next day we had $500,000," said Bettina Luescher, a spokeswoman for the World Food Program at U.N. headquarters in New York City. "They shine the light on the real emergencies and step up where we really need help."

Without that money, Luescher said the World Food Program had been on the verge of shutting down the air service to Darfur, which brings 3,000 aid workers a month to the stricken region. The U.N. food charity fed 3.3 million people there last month alone.

Clooney has spoken for several years about the crisis in Darfur, where more than 200,000 people have been killed and about 2.5 million people displaced in three years of fighting between African rebels and government troops allied with Arab militia known as the janjaweed.

He went on a U.N. technical mission including Darfur and neighboring Chad in January, sharing his impressions with reporters upon his return to draw attention to the crisis.