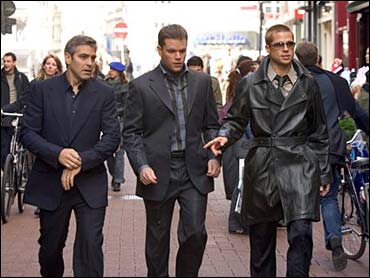 Now that George Clooney's an Academy Award winner, he and his crew are returning to their thieving ways.

Clooney, Brad Pitt and Matt Damon will star in "Ocean's 13," the third flick in their franchise about a gang of lovable crooks, distributor Warner Bros. announced Monday.

A supporting-actor Oscar winner for the oil-industry thriller "Syriana," Clooney will reprise his role as leader of the pack Danny Ocean, with the group pulling off a new heist in Las Vegas.

Clooney's producing partner Steven Soderbergh, who made the 2001 hit "Ocean's Eleven" and its 2004 sequel "Ocean's Twelve," will direct again.

Julia Roberts, Clooney's love interest in the first two movies, and "Ocean's Twelve" co-star Catherine Zeta-Jones will not be back for the third movie, according to Warner Bros.

"It was a script issue. We didn't have a place to really use talent like theirs, two big stars like that," said Jerry Weintraub, the franchise's producer. "They're very good friends of ours, and neither Soderbergh nor I would prevail on them to come back and do nothing just to do it."

Weintraub said if the filmmakers hit on a good idea to include the actresses, there was a chance Roberts and Zeta-Jones could return.

The studio expects the rest of the cast, including Don Cheadle, Andy Garcia, Bernie Mac, Carl Reiner and Elliott Gould, will return. Joining the cast will be Ellen Barkin.

Production is scheduled to start in July, with "Ocean's 13" due in theaters in summer 2007.