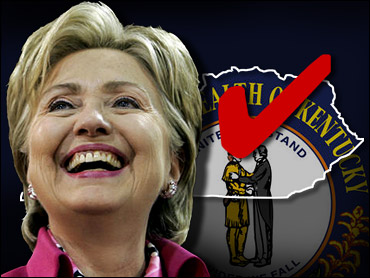 There have been four quarters in the Democratic presidential nomination battle. We're late in the fourth quarter now, and when it's over, Hillary Clinton will likely have won three of the quarters - and won the most votes overall - but lost the game.

The first quarter was the shortest and most intense, beginning with Iowa and including New Hampshire, Michigan, South Carolina, and Florida. When one includes Florida, where both candidates' names were on the ballot, and excludes Michigan, where Barack Obama's was not, Clinton won the popular vote in that period, with 1,124,380 votes to Obama's 975,927 - an edge of 148,453 votes. (The number seems precise, but it isn't; it's not possible to peg the exact number of votes Clinton and Barack Obama won, because some critical races - in this quarter, Iowa - didn't result in official popular vote tallies. These numbers are from the RealClearPolitics totals from states with official vote totals.)

The second quarter consisted entirely of Super Tuesday primaries, and Clinton won that one, too, amassing 8,086,836 votes to Obama's 8,000,574, a margin of 86,262 votes. At that point - halftime? - when one counts the first two quarters, Clinton's popular vote lead was 234,715 votes out of more than 18 million votes cast for the two candidates.

It's often been said that Clinton, who assumed she would wrap up the nomination on Super Tuesday, had no plan for what followed. And in the third quarter, which began in the Virgin Islands on February 9 and ended in Wisconsin on February 19, Obama blew her away. He won all nine contests in that period, collecting 2,192,813 votes to Clinton's 1,313,256. The victories - by a margin of 879,557 votes - gave the Obama campaign a clear sense of momentum and the popular-vote lead. Whereas Clinton led by 234,715 votes at halftime, by the end of the third quarter, Obama's lead was 644,842.

But Clinton has made a huge comeback in the fourth quarter. Beginning with her victories in Texas and Ohio and going through last night's win in Kentucky, she has won 6,505,231 votes to Obama's 5,983,422 - a margin of 521,809 votes. That number will likely grow after the remaining contests in Puerto Rico (where she has a significant lead), South Dakota, and Montana. At the moment, counting all four quarters, Obama has a popular-vote lead of 123,033 votes. By the end of the day on June 3, Clinton might well be ahead.

If that happens, she will be the Al Gore of the Democratic primaries: the winner of the popular vote who lost the election. But unlike Gore, who lost the 2000 presidential race because of the constitutional requirements of the Electoral College, Clinton will lose because of the Democratic party's arcane - and changeable - rules of delegate allocation. For example, Clinton won Texas in the sense that most of us understand winning an election, but Obama ultimately walked away with more delegates, because of the party's idiosyncratic allocation process.

In 2000, the fact that the Democratic candidate won the popular vote but lost the election caused great anger and bitterness among some Democrats. Those feelings lasted quite a while; there were a lot of "Re-Defeat Bush" stickers on cars in 2004. But in 2008, the prospect that a Democratic candidate might win the popular vote but lose the nomination does not seem as troubling. Party leaders and their allies in the press are not only not angry and bitter, they don't even seem unhappy that the primary season might produce a nominee who lost the popular vote.

Why the change? It's not clear. Certainly party elites view Obama as the fresher and more attractive candidate. But contests in which the winner of the most votes doesn't get the prize produce lasting after-effects, and in the months ahead, Democrats may be in for more than they know.
By Byron York
Reprinted with permission from National Review Online