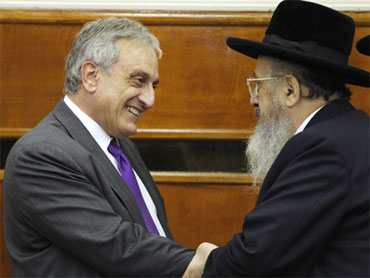 He and his wife, Sen. Hillary Rodham Clinton, D-N.Y., owed millions to lawyers who defended them during the years-long investigation of Whitewater and other business dealings and helped in the Monica Lewinsky impeachment mess.

The news was revealed in financial disclosure forms filed by Sen. Clinton that show she and her husband no longer have any legal debts and are now more than comfortable financially, with millions of dollars in income, mostly from a pair of best-selling memoirs.

"They are both pleased that it's been paid," said Jim Kennedy, a spokesman for the former president.

As expensive as their legal defense was, the documents show their earning ability far outstrips those costs.

The couple had asked the government to pay some $3.5 million of their costs, but a court granted them only a tiny fraction in payment, about $85,000.

The president is not required to report the extent of payments from his best-selling autobiography "My Life," which has sold more than 2 million copies in the United States and was just released in paperback.

Under reporting rules, as a spouse of a senator he is only required to report that he received more than $1,000 in payments for the book, though published reports have said he inked a deal worth $10 million to $12 million with publisher Alfred A. Knopf.

Noticeably absent from the power couple's finances is the millions of dollars in speakers fees that the former president earned in past years.

Mr. Clinton's spokesman said the president's busy schedule and two surgeries in 2004 for a heart bypass brought down his speech earnings.

"2004 was an extremely busy year for him, between his foundation work, writing his book, on the book tour, recuperating from heart surgery, and preparing for the library opening. He's more in demand than ever, but most requests have to be turned down," said Kennedy.