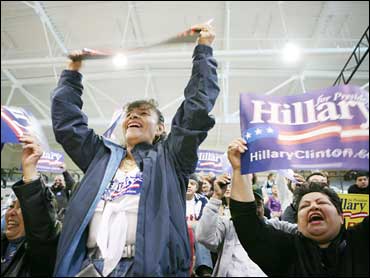 "I guess this is how the West was won," Clinton told cheering supporters in Las Vegas. The victory was her second straight, coming after an upset win in the New Hampshire primary. (

Video: Clinton after her win
)

With almost all of the state's precincts reporting, Clinton had 51 percent support. Barack Obama had 45 percent and John Edwards had 4 percent.

CBS News estimates that Obama won 13 delegates and Clinton 12. Obama was able to take more delegates despite getting fewer overall votes because of the proportional manner in which Nevada awards delegates.

On the Republican side, former Massachusetts Gov. Mitt Romney won the state's caucuses. (

Video: Romney after his win
.)

Romney had 51 percent support, which put him more than 35 percentage points ahead of his nearest competitors. Texas Rep. Ron Paul came in second with 14 percent. Arizona Sen. John McCain the winner of the South Carolina primary also held on Saturday, came in third in Nevada with 13 percent.

Enthusiastic voters showed up in record numbers for Saturday's presidential caucuses in Nevada, surprising Democratic and Republican organizers who figured on lower turnout.

More than 120,000 Democrats, nearly a third of all Nevada's registered Democrats, showed up at 520 precincts around the state. More than 42,000 Republicans, 10 percent of registered GOP voters, were on hand at 113 precincts.

At the Bellagio hotel-casino, some 200 people stood on each side of the caucus room, shouting loudly across rows of empty chairs separating them. On one side of the room, Clinton backers waved blue signs while the Obama supporters in red T-shirts shouted back.

In CBS News entrance polls, half of Democratic caucus-goers cited the economy as the most important issue to them. Twenty-three percent cited health care and 22 percent cited the Iraq war.

Obama won the support of younger voters and Clinton won among older voters. Voters under age 45 broke for Obama over Clinton 48 percent to 34 percent, while those over 45 chose Clinton over Obama 54 percent to 33 percent.

Hispanics made up 14 percent of Democratic caucus-goers in Nevada today, and they overwhelmingly supported Clinton. She got 64 percent support from Hispanics, while Obama got 26 percent and Edwards got 8 percent.

"This was a nice win for Clinton in a contest that was complex and difficult to figure out going in," said CBSNews.com Senior Political Editor Vaughn Ververs.

"Clinton has to be especially heartened at her success among Hispanic voters, a key block in some of the upcoming Super Tuesday states," added Ververs. "For John Edwards, finishing in the low single-digits among delegates selected was a devastating blow to his hopes after polls indicated he would be competative."

Romney, the only Republican to seriously focus on Nevada, earned his second straight victory today, following a win in the Michigan primary earlier in the week.

In a statement released while he flew to Florida, Romney said Nevada Republicans had cast their votes for change. "With a career spent turning around businesses, creating jobs and imposing fiscal discipline, I am ready to get my hands on Washington and turn it inside out," it said.

According to CBS News entrance poll data, Mormons comprised 26 percent of those attending Nevada's GOP caucuses, and 95 percent of them voted for Romney.

Three in four Nevada GOP caucus-goers were conservative, and 45 percent of GOP voters said that it was important that a candidate shares their values. GOP caucus-goers in both categories supported Romney.

The economy and illegal immigration were the issues most on the minds of Nevada's Republican voters today. The two issues were cited as their most important facing the country by more than 70 percent of voters.

Romney had made seven campaign trips to Nevada. He has largely ceded the South Carolina Republican race, also taking place today, to his rivals. South Carolina will hold its Democratic primary next Saturday.

Democrats have been mired in legal disputes, last-minute charges of dirty politics, and exchanges about race in Nevada, the U.S.'s fastest-growing state.

Obama, who won the kickoff Iowa caucuses less than a month ago, absorbed his defeat with a statement that said he had conducted an "honest, uplifting campaign ... that appealed to people's hopes instead of their fears."

His campaign manager, David Plouffe, was far more pointed in a written statement that accused the Clinton campaign of "an entire week's worth of false, divisive attacks designed to mislead caucus-goers and discredit the caucus itself."

Clinton and Edwards ganged up on Obama in the final days, mocking his evocation of former Republican President Ronald Reagan in an effort to offset Obama's endorsement by the powerful Culinary Workers Union. The Illinois senator was thought to benefit from special caucus rules that Clinton supporters tried but failed to overturn in federal court.

Obama responded by suggesting Clinton would be a "president whose plans change with the politics of the moment" as part of one of his most direct critiques of the New York senator yet.