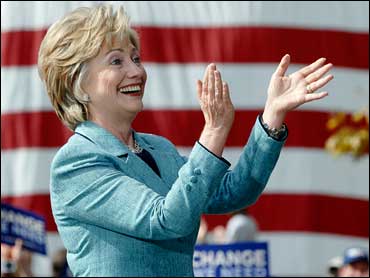 Longtime friends and advisors of Hillary Rodham Clinton tell CBS News that it won't be easy for the former first lady to leave the Senate, but if Barack Obama really wants her to be his top diplomat, they say she absolutely wants to do it, so long as the vetting process goes smoothly.

After reports of a bumpy start, sources say it's now going well enough that a formal announcement of her selection could happen in the next week, reports CBS News correspondent Chip Reid.

Obama transition officials say other candidates have been vetted for the job, but the New York senator has emerged as the leading contender and the vetting of former president Bill Clinton has been particularly intense. Associates say Hillary Clinton has been told that Mr. Obama wants her to be secretary of state, although accounts differ on how bluntly and directly Mr. Obama made the overture. They would speak only on grounds of anonymity because of the private nature of the negotiations.

While many people familiar with the New York senator's thinking say she is inclined to take the secretary of state's job if it is offered, others say she is also considering the consequences of leaving the Senate, where she had hoped to take a leading role on health care reform and other issues.

"Would she be willing to give up her independent stature in the U.S. Senate, Robert F. Kennedy's seat, to be in the Cabinet? It will be a considerable decision for her," said Lanny Davis, a former Clinton adviser not involved in the vetting. "It's a completely different life than you lead in the Senate, where you are your own spokesperson, your own advocate. When you join the Cabinet of the president of the United States, that is no longer the case."

"I believe that she's torn," Joe Lockhart, Mr. Clinton's former press secretary, said on CBS News' The Early Show. "What gets lost in the campaigning is how much she loves being a senator… This is a question that will be personal. What can she do that best serves the country at this time."

Hillary Clinton declined to discuss any part of the selection process Tuesday. "I've said everything I have to say on Friday," she said.

Earlier Wednesday, it was reported that Mr. Clinton has offered several concessions to help his wife become secretary of state, according to people familiar with Mr. Obama's transition vetting process said Wednesday.

Hoping to ease concerns about possible conflicts of interest, Mr. Clinton has agreed to publicly disclose the names of all donors who have given more than $250 to his presidential library and foundation.

He will also submit future foundation activities and paid speeches to a strict ethics review, said Democrats knowledgeable about the discussions.

They also said that Mr. Clinton would step away from day-to-day responsibility for his foundation while his wife serves and would alert the State Department to his speaking schedule and any new sources of income. The Democrats spoke only on grounds of anonymity because of the private nature of the Cabinet-selection process.

Since Sen. Clinton has emerged as a top contender for the State job, her husband's international business deals and the fundraising he has done for his foundation and presidential library have come under careful review by Mr. Obama's transition team. The former president had indicated earlier that he would be willing to significantly increase the transparency of those activities if it would boost the former first lady's chances of getting the job.

A team of attorneys is representing the Clintons in negotiations with Obama officials, in talks which have taken place this week at a law firm in Washington.

Aides familiar with the negotiations said the vetting has gone smoothly and both Clintons had been fully cooperative with the process. One Clinton adviser noted that former President George H.W. Bush has given paid speeches and participated in international business ventures since his son, George W. Bush, has been president, without stirring public complaints or controversy about a possible conflict of interest.

One Democrat who advised her campaign said few of her senior strategists knew anything about the former president's business arrangements and whether they would hold up under scrutiny if she won the nomination. The adviser spoke on background, not authorized to speak publicly for Hillary Clinton's political operation.

During his primary campaign against Hillary Clinton, Mr. Obama pressed the former president to name the donors to his library. Bill Clinton refused, saying many had given money on the condition that their names not be revealed. He promised to make the donors' names public going forward if his wife won the Democratic nomination.

The former president has engaged in other deals that could complicate his wife's work with foreign governments as secretary of state. Records show he raised money for his foundation from the Saudi royal family, Kuwait, Brunei and the Embassy of Qatar, and from a Chinese Internet company seeking information on Tibetan human rights activists.

At the State Department, the prospect of Clinton as secretary is creating some anxiety among career foreign service officers worried that she would install her own loyalists and exclude them from policy-making. Some at the State Department see her as a foreign policy lightweight, although there is grudging acknowledgment of her star power.

Others closer to the Obama camp have criticized Clinton's credentials for the job.

Greg Craig, a law school classmate of both Clintons who led President Clinton's defense team during his impeachment, wrote a blistering memo during the primary campaign attacking Hillary Clinton's claim to have brokered foreign policy deals during her husband's presidency

"There is no reason to believe ... that she was a key player in foreign policy at any time during the Clinton administration," Craig, an early Obama supporter likely to be White House counsel, wrote in March.