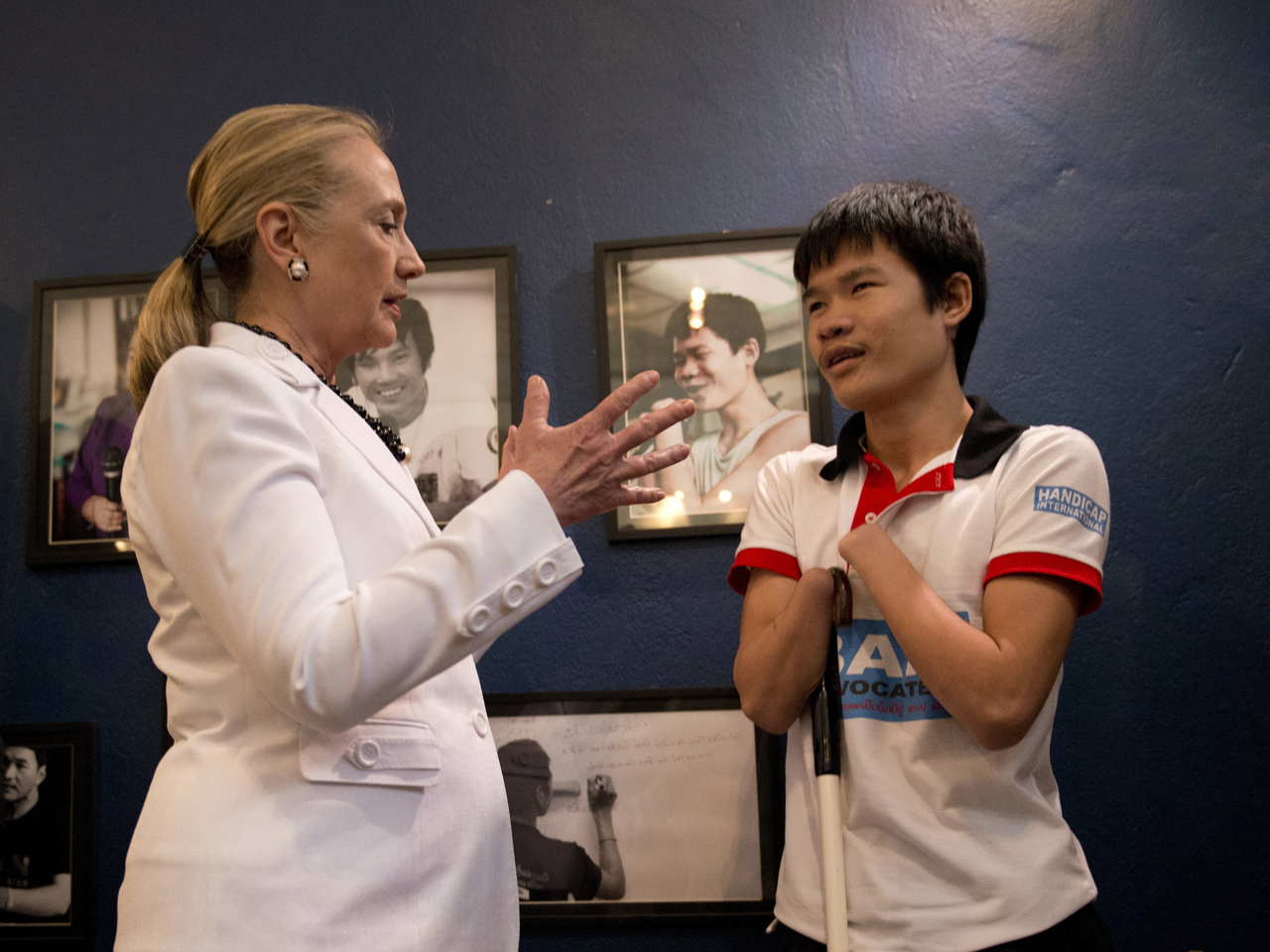 (CBS News) VIENTIANE, Laos - It was a painful sixteenth birthday for Phongsavath Souliyalat. It was the day he lost both arms and his eyesight when a U.S. cluster bomblet exploded in his hands. While walking to school, a friend handed him the unexploded bomb without realizing that it would nearly kill Souliyalat.

The two teenagers weren't even alive during the relentless bombing campaign by U.S. forces to cut off supply lines to the North Vietnamese, from 1964 to 1975, but their generation continues to stumble upon lethal reminders.

Secretary of State Hillary Clinton listened to Souliyalat's story Wednesday as she got a tour of the Cooperative Orthotic and Prosthetic Enterprise (COPE), an organization in the Laotian capital that helps provide victims with prosthetic limbs.

"We have to do more," Clinton told the young man. "That's one of the reasons I wanted to come here today, so that we can tell more people about the work that we should be doing together."

More than 30 years after the end of U.S. military action in Laos, the communist nation still holds the title as the single-most bombed country per-capita in global history.

The U.S. pledged $9.2 million dollars in financial assistance in 2012 to disarm unexploded ordnance, and has provided more than $59 million to remove ordnance since 1995, according to the State Department.

Secretary Clinton said the U.S. effort is focused on bringing "the legacy of the Vietnam War era to a safe end."

Sec. Clinton met with the Laotian Prime and Foreign Ministers to ask for help in finding the remains of 575 Americans still officially listed as Missing in Action. Laotian-U.S. cooperation to recover remains of U.S. servicemen began in the 1980s.

As neighboring China sees its regional influence grow, Laos has started to reach out for diplomatic engagement with the United States after decades of isolation. U.S. officials say the two countries are working together on issues such as human trafficking, education exchange and Laos' desire to become a member of the World Trade Organization.

The U.S. is expanding its outreach in the region to open new markets for American-made goods as part of its "economic statecraft."

The Secretary concluded her four-hour visit to Vientiane by laying lotus flowers in the lap of a Buddha statue at the Ho Phrakeo temple.

Clinton was the first U.S. Secretary of State to visit Laos in 57 years. She continues her tour of Asia with a two-day session of meetings at the ASEAN forum in Cambodia.