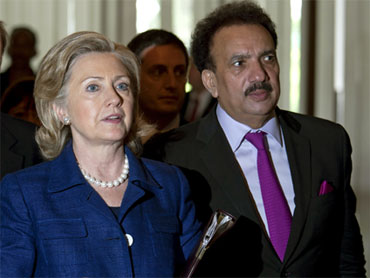 U.S. Secretary of State Hillary Rodham Clinton sought Monday to convince skeptical Pakistanis that American interest in their country extends beyond the fight against Islamist militants by announcing a raft of new aid projects worth $500 million.

The projects, which include hospitals and new dams for badly needed electricity, are part of a $7.5 billion aid effort to win over Pakistanis suspicious about Washington's goals here and in neighboring Afghanistan, where U.S. troops are being killed in ever greater numbers in an insurgency with roots in Pakistan.

Mistrust over U.S. intentions in Pakistan is in part due to Washington's decision to turn away from the nuclear-armed country after enlisting its support to defeat the Soviets in Afghanistan in the 1980s.

"Of course there is a legacy of suspicion that we inherited. It is not going to be eliminated overnight," said Clinton following talks in Islamabad.

"It is however our goal to slowly but surely demonstrate that the United States is concerned about Pakistan for the long term and that our partnership goes far beyond security against our common enemies," she said.

Clinton said the U.S. will complete two hydroelectric dam projects to supply electricity to more than 300,000 people in areas near the Afghan border, will renovate or build three medical facilities in central and southern Pakistan and will embark on a new initiative to improve access to clean drinking water in the country.

These projects and several others focused on promoting economic growth will cost some $500 million and will be funded by legislation approved by Congress to triple nonmilitary aid to $1.5 billion a year over five years. The initiatives mark the second phase of projects begun under a new and enhanced strategic partnership.

CBS News correspondent Mandy Clark reports that Clinton's next stop in Asia will be Afghanistan -- where she is expected to urge President Hamid Karzai's government to make better use of the billions of dollars already pouring into his war-ravaged country than to offer new U.S. aid.

"Secretary Clinton has a very tricky message to deliver," says Clark. "On one hand the U.S. is committed to the Afghan government's success. On the other hand, she is going to demand that the Afghan president does more to fight corruption, and the Taliban."

Clinton acknowledged rebuilding trust between the U.S. and Pakistan would be difficult, comparing the effort to launching a rocket into space.

"We're trying to escape the bonds of gravity, leave behind an era of mistrust and launch a new period of cooperation," she said during a town hall meeting attended by several hundred Pakistanis.

Despite the U.S. initiatives, Clinton faces challenges in appealing for greater Pakistani cooperation in cracking down on militants who use their sanctuaries in Pakistan to launch cross-border attacks against NATO troops in Afghanistan.

Many analysts believe Pakistan is reluctant to target Afghan Taliban militants in the country with whom it has historical ties because they could be useful allies in Afghanistan after international forces withdraw.

Pakistan has shown more interest in supporting Afghanistan's push to reconcile with Afghan Taliban rather than fight them, a tactic the U.S. believes has little chance of succeeding until the militants' momentum on the battlefield is reversed.

Clinton said Monday that any insurgents who wish to reconcile must lay down their arms, renounce any partnership with al Qaeda and accept Afghanistan's constitution.

"We would strongly advise our friends in Afghanistan to deal with those who are committed to a peaceful future where their ideas can compete in the political arena through the ballot box, not through the force of arms," said Clinton.

The U.S. has pushed Pakistan and Afghanistan to improve their often frosty relations and prodded the two countries to seal a landmark trade deal Sunday that was reached after years of negotiation. The pact, which eases restrictions on cross-border transportation, must be ratified by the Afghan parliament and Pakistani Cabinet.

U.S. officials said they believe it will significantly enhance ties between the two countries, boost development and incomes on both sides of the border and contribute to the fight against extremists.