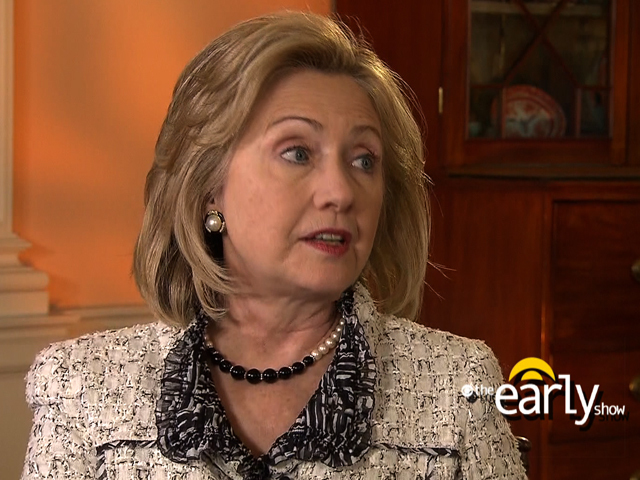 As Libya's long-time ruler Col. Muammar Qaddafi continues hammering rebel positions with his army's jet fighters, and wages an all-out war on their ranks on the ground, President Obama's government remained uncertain as to how it should respond to the aggression.

Mr. Obama is still considering the options on the table -- which include the much-discussed international implementation of a no-fly zone over Libya.

While the U.K. and France have come out strongly in favor of such a move, the White House continues to stress that any such maneuvers would need broad international support to be effective.

In an exclusive interview with CBS News, Secretary of State Hillary Clinton tells "The Early Show" co-anchor Erica Hill, "we believe it's important that this not be an American, or a NATO, or a European effort. It needs to be an international one."

"The British and French governments are going to the United Nations with a draft resolution that would authorize international action. I think it's very important that there be a UN decision on whatever might be done," said Clinton.

"We don't want there to be any room for anyone, including Col. Qaddafi, to say that 'This isn't about my people, this is about outsiders.' Because that would be doing a grave disservice to the sacrifice of the people in Libya."

Clinton acknowledged there was "still a lot of opposition" to a resolution approving a no-fly zone within the UN Security Council, but said the U.S. and its allies in Europe were, "working to come up with a good, solid international package."

How to Make a Perfect Meatloaf