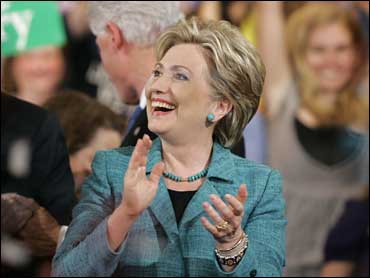 With nearly all of the votes counted, the former first lady led Obama 55 percent to 45 percent. CBS News estimates that Clinton won 82 delegates in the Keystone State while Obama won 69, with 7 delegates still unallocated. Obama now has an overall lead of 126 delegates.

"Some counted me out and said to drop out," the former first lady told supporters cheering her triumph in a state where she was outspent by more than two-to-one. "But the American people don't quit. And they deserve a president who doesn't quit, either."

"Because of you, the tide is turning." (

Her victory, while comfortable, set up another critical test in two weeks time in Indiana. North Carolina votes the same day, and Obama already is the clear favorite in a Southern state with a large black population.

"Now it's up to you Indiana," Obama said at a rally of his own in Evansville after Pennsylvania denied him a victory that might have made the nomination his. (

Obama criticized John McCain, the Republican presidential nominee-in-waiting, by name, saying he offers more of the same policies advocated by President Bush. He took aim at Clinton without mentioning her by name. "We can calculate and poll-test our positions and tell everyone exactly what they want to hear," he said. "Or we can be the party that doesn't just focus on how to win, but why we should."

Clinton scored her victory by winning the votes of blue-collar workers, women and white men in an election where the economy was the dominant concern.

She won despite being outspent heavily by her rival in a six-week campaign that allowed time for intense courtship of the voters.

Clinton showed her blue collar bona fides one night by knocking down a shot of whiskey, then taking a mug of beer as a chaser. Obama went bowling in his attempt to win over working-class voters.

"Hillary Clinton did what she needed to do in order to continue her campaign into North Carolina and Indiana two weeks from now, perhaps through the end of the primary process in June and potentially all the way to the Democratic convention in August," said CBSNews.com senior political editor Vaughn Ververs. "She almost certainly muted any calls for her to exit the race." (Click here to read Ververs' complete analysis).

The win gave Clinton a strong record in the big states as she attempts to persuade convention superdelegates to look past Obama's delegate advantage and his lead in the popular vote in picking a nominee. She had previously won primaries in Texas, California, Ohio and her home state of New York, while Obama won his home state of Illinois.

At the same time, even some of her aides conceded she is facing another likely must-win state in Indiana in two weeks time, particularly with Obama favored to carry North Carolina on the same day.

With 158 delegates at stake, Pennsylvania offered the largest prize remaining in a primary season that ends on June 3.

CBS News exit polls show that most Pennsylvania Democrats made up their minds a long time ago, while only 24 percent decided within the last week.

But voters who made late decisions broke to Clinton, with those deciding in the last week supporting the New York senator 58 percent to 42 percent. (See all exit poll data.)

New Democratic voters, who either switched from another party or registered as a Democrat for the first time, strongly backed Obama at a rate of 62 percent to 38 percent.

Women made up 59 percent of Pennsylvania Democratic voters, and they voted for Clinton over Obama 57 percent to 43 percent. Obama won a majority of men (53 percent).

As has been the case in other states, the economy was the most important issue to voters, with 55 percent of Pennsylvania Democrats describing it as such, and most Democrats saying that the economy is in a recession. The war in Iraq and health care were the other top issues to voters.

CBS News political consultant Monika McDermott said that the biggest story of the evening "may be the polarized electorate that turned out to vote. Pennsylvania's Democratic primary results, while smaller than the lead Sen. Hillary Clinton once had over Sen. Barack Obama in the state, show an electorate consistently divided on factors like education, race and income and also newly divided along religious lines. (Click here to read McDermott's complete analysis)

The six-week run-up to the primary was notable for close-to-the-ground campaigning normally reserved for the early-voting states of Iowa and New Hampshire, and for the decidedly negative tone of its final few days.

Flush with cash, Obama reported spending $11.2 million on television in the state, compared with $4.8 million for Clinton. (See the latest campaign finance reports.)

The tone of the campaign was increasingly personal.

"In the last 10 years Barack Obama has taken almost $2 million from lobbyists, corporations and PACs. The head of his New Hampshire campaign is a drug company lobbyist, in Indiana an energy lobbyist, a casino lobbyist in Nevada," said a Clinton commercial that aired in the final days of the race.

Obama responded with an ad that accused Clinton of "eleventh-hour smears paid for by lobbyist money." It said that unlike his rival, he "doesn't take money from special interest PACs or Washington lobbyists - not one dime."

To the delight of Republicans, the six-week layoff between primaries produced a string of troubles for the Democrats.

Obama was forced onto the defensive by incendiary comments by his pastor, Rev. Jeremiah Wright, then triggered controversy on his own by saying small-town Americans cling to guns and religion because of their economic hardships.

Clinton conceded that she had not landed under sniper fire in Bosnia while first lady, even though she said several times that she had. And she replaced her chief strategist, Mark Penn, after he met with officials of the Colombian government seeking passage of a free trade agreement that she opposes.

McCain, the Republican nomination already his, rose in the polls as he prepared for the fall campaign.

The CBS News early exit polls show that the majority of Pennsylvania Democrats said they would rally behind whoever becomes the Democratic nominee. They would back Obama over McCain (73 percent to 15 percent) and would support Clinton over McCain by an even wider margin (81 percent to 11 percent).