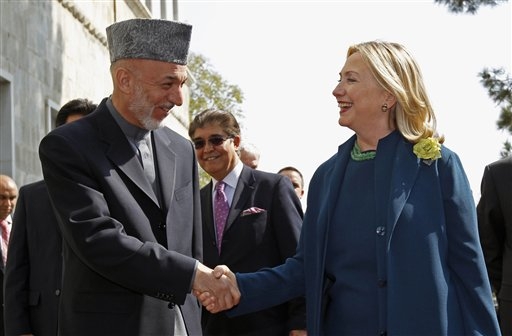 KABUL, Afghanistan -- U.S. Secretary of State Hillary Rodham Clinton on Thursday pushed Pakistan's leaders to fight harder against terrorists within their own borders, saying the Pakistanis "must be part of the solution."

"That means ridding their own country of terrorists who kill their own people and who cross the border to kill people in Afghanistan," Clinton said.

Outlining a fresh "fight, talk, build" strategy at a news conference with Afghan President Hamid Karzai, Clinton said it was imperative for the U.S., Afghanistan and Pakistan to cooperate against insurgents.

Clinton is heading Thursday to Islamabad, where she will lead a delegation of Obama administration officials in talks with Pakistani leaders. Ties between the two countries have been strained over counterterrorism issues.

Clinton said she would emphasize the urgency of the new strategy to officials in Pakistan.

"Violent extremism has also taken the lives of thousands of Pakistanis as well as Afghans. And if you look beyond the history of distrust, it is clear that all countries in the region will have to work together for all the people in the region," she said.

She also underscored continuing U.S. support for Karzai's flagging efforts to bring back into society those insurgents willing to accept clear guidelines.

"Insurgents must renounce violence, abandon al Qaeda and abide by the laws and constitution of Afghanistan, including its protections for women and minorities," Clinton said.

"Reconciliation is possible," she added. "Indeed, it represents the best hope for Afghanistan and the region."