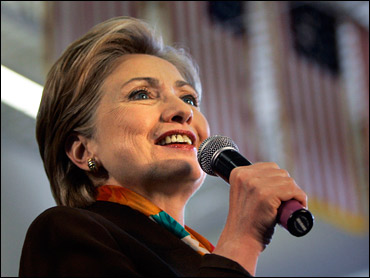 Hillary Rodham Clinton says she will consult with party leaders and supporters to determine her next steps now that Barack Obama has enough delegates to clinch the Democratic nomination.

In a speech in New York, Clinton told supporters that: "This has been a long campaign and I will be making no decisions tonight." As she spoke, supporters chanted "Denver, Denver," thinking ahead to the site of the party's convention in August.

According to the latest CBS News estimates, Obama secured enough delegates to clinch the nomination on Tuesday.

Obama declared victory at a rally in St. Paul, Minn. "Tonight, I can stand before you and say that I will be the Democratic nominee for the President of the United States of America," Obama said.

But Clinton did not concede the race in her remarks.

"A lot of people are asking, 'What does Hillary want?"' Clinton said at a rally in New York. "I want what I have always fought for: I want the nearly 18 million people who voted for me to be respected and heard."

Earlier in the day, Clinton told congressional colleagues she would be open to joining Obama's ticket as his vice presidential nominee. But in her speech, the former first lady stopped short of ending or suspending her campaign. She did say she was committed to a united Democratic Party moving forward.

On a conference call with other New York lawmakers, Clinton, a New York senator, said she was willing to become Obama's vice presidential nominee if it would help Democrats win the White House, according to a participant who spoke on condition of anonymity because this person was not authorized to speak for Clinton.

Clinton's remarks came in response to a question from Democratic Rep. Nydia Velazquez, who said she believed the best way for Obama to win key voting blocs, including Hispanics, would be for him to choose Clinton as his running mate.

Clinton also told colleagues the delegate math was not there for her to overtake Obama, but that she wanted to take time to determine how to leave the race in a way that would best help Democrats.

"I deserve some time to get this right," she said, even as the other lawmakers forcefully argued for her to press Obama to choose her as his running mate.

Aides to the Illinois senator said he and Clinton had not spoken about the prospects of her joining the ticket.

"Certainly there'll be some plusses and minuses," said CBS News chief Washington correspondent Bob Schieffer. "The plusses are obvious. She can help him bring women to support him. She can help him with blue-collar workers. But there are some minuses, and the main minus is Bill Clinton himself. Does Obama want to bring on the questions that will be asked about his personal life?"

Many of her top supporters spoke openly of Clinton's potential vice presidential prospects. Lanny Davis, a former White House special counsel under President Clinton, said he told the former first lady Tuesday that he was initiating a petition to press Obama to select her for the second spot on the ticket. He said Clinton did not encourage or discourage the step.

"If he doesn't have her, I think he can still win. With her on the ticket, he can't be beat," Davis said.

Clinton's national finance chairman, Hassan Nemazee, said he was also pushing an Obama-Clinton ticket, claiming that together they would be able to raise $200 million to $250 million for the general election.

Joseph Crowley, a Queens Democrat who participated in the call, said her answer "left open the possibility that she would do anything that she can to contribute toward a Democratic victory in November. There was no hedging on that. Whatever she can do to contribute, she was willing to do."

Another person on the call, Rep. Jose Serrano of New York City, said her answer was "just what I was hoping to hear. ... Of course she was interested in being president, but she's just as interested in making sure Democrats get elected in November."

Rep. Charles Rangel, a devoted booster of Clinton who helped pave the way for her successful Senate campaign, said he spoke to her Tuesday and got much the same answer.

"She's run a great campaign and even though she'll be a great senator, she has a lot of followers that obviously Obama doesn't have, and clearly the numbers are against her and so I think they bring all parts of the Democratic Party together and then some," Rangel said.

Obama could also look outside the party to people such as anti-war Republican Sen. Chuck Hagel of Nebraska or independent New York Mayor Mike Bloomberg. Or he could look to one of his prominent supporters such as former Sen. Tom Daschle of South Dakota or try to bring on a Clinton supporter, such as Indiana's Sen. Evan Bayh or retired Gen. Wesley Clark.