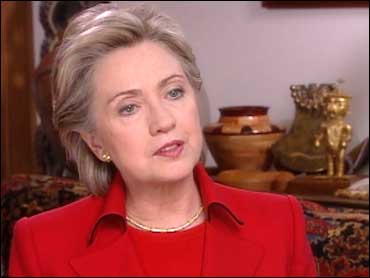 In an interview conducted this afternoon at her home in Chappaqua, N.Y., following last night's victory in the New Hampshire primary, Sen. Hillary Clinton spoke with CBS News anchor Katie Couric about her remarkable win, her message, and what's ahead. What follows is a transcript of the interview.


CLINTON: On Tuesday morning when I got up before the sun was up, and was out helping to deliver coffee to everybody who was working for me, I felt really good by the time I came in around early afternoon. I really did, Katie. I thought "something's happening." Not that I was gonna stand up and announce it, but I could feel it.

COURIC: But your own internal polls were telling you otherwise.

CLINTON: I know that New Hampshire is fiercely independent. I came in there with a very, you know, big problem, as we know. And I just determined that I was gonna dig down deep and reach out and listen and talk and do what I have always done, which is what makes me get up in the morning. That is to figure out how I could tell people what I want to do to serve them.

COURIC: Some observers believe that moment when you got emotional on Monday when your voice cracked and your eyes welled up that that humanized you and made you much more attractive to women voters.

CLINTON: That moment, which obviously I've heard a lot about since, gave people maybe some insight into the fact that I don't see politics as a game. You know, I don't see it as some kind of a traveling entertainment show where, you know, you get up and you perform and you go on to the next venue. You know, for me it is a way of figuring out what we stand for, what our values are, and getting in a position to actually help people.

COURIC: Will you be willing now to reveal more of yourself and be less reserved?

CLINTON: Well, you know, one of my young friends said well, that was like Hillary unplugged. I thought, "OK, I can't sing, I can't play an instrument. But, you know, I will try to let people know enough about me to know that, you know, I don't need to go back and live in the White House. That's not why I'm doing this. I certainly don't need anymore name recognition. And, I mean, I just want to try to convey that we're going to have to make some big decisions in this country." This is the toughest job in the world. I was laughing because you know in that debate, obviously Sen. Edwards and Sen. Obama were kind of in the buddy system on the stage. And I was thinking whoever's up against the Republican nominee in the election debates come the fall is not gonna have a buddy to fall back on. You know, you're all by yourself. When you're president, you're there all by yourself.

COURIC: How can you be a real change agent when you were involved in a two-term administration in the '90s. You're yesterday's news, they think in a way?

CLINTON: Well I really didn't alter my message, you know. I've been saying for many months if you're ready for change, I'm ready to lead, because I think it does go hand in hand. If people really want change - and I agree we've got to after this administration, and the problems we see in the world - then let's be sure we're electing someone who is not just talking about change but has a history of acting to make change.

COURIC: When we last spoke you said with certitude, "I will be the Democratic nominee." Unwavering certitude. Are you sorry you said that with such confidence? Do you think that perhaps turned some people off?

CLINTON: Well it might have. I was laughing about it afterwards because I can remember when I first met Jimmy Carter in 1975 and I introduced myself to him and he said, "I'm Jimmy Carter and I'm going to be president." I said, "well, you know, Gov. Carter, well, maybe you shouldn't say that." And so I was laughing because I thought well, if you really believe you'd be the best president, you can't get up everyday and do this job that we're doing running for president - which is really a full time job - unless you really believe you are the person that can best serve our country at this time.

COURIC: Can't you just say I hope so though? Isn't it a little humility appealing though?

CLINTON: I'm humble everyday in the face of what I'm facing. I am absolutely aware of how difficult this is and how hard the job that I'm seeking will be but I also know that you've got to really believe that you can do it. But ultimately you have to be humble because it's up to the voters. Voters get to decide.