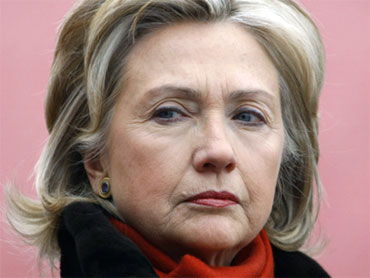 Secretary of State Hillary Rodham Clinton is vowing that the Obama administration will not accept a nuclear armed Iran and is working on sanctions "that will bite" to press it to come clean about its suspect atomic program.

In remarks prepared for delivery to a pro-Israel group later Monday, Clinton said parts of Iran's government are "a menace" to the Iranian people and the region. She said Iran's leaders must know there are "real consequences" for not proving their nuclear activities are peaceful.

"Our aim is not incremental sanctions, but sanctions that will bite," Clinton was to say in a speech to the American Israel Public Affairs Committee. The text of her comments was released by the State Department.

"Let me be very clear: The United States is determined to prevent Iran from acquiring nuclear weapons," she said.

Clinton said that if Iran developed a nuclear weapon, it would embolden terrorists and spark an arms race that would destabilize the Middle East.

Iran has spurned President Obama's efforts to engage and thus far rejected incentives offered by the five permanent U.N. Security Council members - Britain, China, France, Russia and the U.S. - and Germany to halt uranium enrichment, a process that can produce fuel for a bomb.

Washington and its allies fear Iran wants to build a nuclear bomb, an accusation denied by Iran, which says its program is intended only to generate electricity.

Israel regards Iran as a threat to its existence and impatience is growing in the Jewish state for fresh action against the country. Iran is already under three sets of Security Council sanctions and the U.S. and its European allies are pressing for a fourth.

But China, a foe of sanctions in general that can block penalties with its veto power in the council, is opposed and has scuttled the administration's plans for quick action. Clinton allowed that building support for new sanctions was taking time but said it was worth the wait.

"It is taking time to produce these sanctions, and we believe that time is a worthwhile investment for winning the broadest possible support for our efforts," she said.

That "will show Iran's leaders that there are real consequences for their intransigence, that the only choice is to live up to their international obligations," Clinton said.

U.S. officials have said repeatedly they do not want the sanctions to hurt the Iranian people. They say new penalties will target leadership entities, such as the Iranian Revolutionary Guards Corps, which plays a major role in the country's politics and economy.

"Elements in Iran's government have become a menace, both to their own people and in the region," she said, referring to the crackdown.

Her comments came a day after Iran's supreme leader Ayatollah Ali Khamenei denounced the United States, accusing it of plotting to overthrow its clerical leadership, in a chilly response to Obama's latest overture for better cultural ties with Iran.

Ayatollah Ali Khamenei did not outright reject Obama's offer but the supreme leader said that so far, Washington's offers of engagement with Tehran have been a deception.

In a message released Friday night to coincide with the Iranian new year, Nowruz, Obama told the Iranian people that the Americans want better cultural exchanges with Iran - but he also criticized the Iranian leadership for "turning its back" on U.S. overtures.