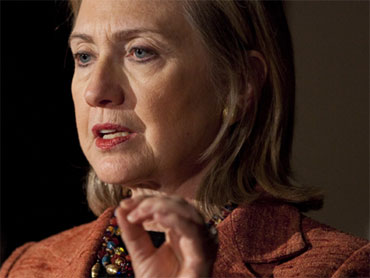 U.S. Secretary of State Hillary Rodham Clinton hit out Sunday at Myanmar's military rulers, calling their weekend elections deeply flawed and a sign of "heartbreaking" repression in the country.

In a speech to Australian university students, Clinton also called on the military-led government in Fiji to restore democracy in the Pacific island nation.

She said she hoped Myanmar's election — the first in 20 years — could produce a few new leaders who might change the country's direction. But she stressed the United States would continue to support an international inquiry into human rights abuses in the country also known as Burma.

Sunday's elections "once again expose the abuses of the military junta," she told an audience at the University of Melbourne. "It's heartbreaking because the people of Burma deserve so much better."

The vote is being held amid both a barrage of criticism that the balloting is rigged in favor of the military and hope that some change toward democratic reform might nonetheless follow. Clinton shared that sentiment.

"We hope that perhaps out of these elections some leaders will emerge who know that Burma has to take a different track and cannot continue to do the same thing and realize the potential of their people," she said.

Clinton said the U.S. and Australia would work together to improve conditions in Myanmar and also in Fiji, where the military seized control in a 2009 coup and has refused to relinquish power.

"We're going to be working together ... to persuade the military government in Suva to meet its commitment to bring democracy back to Fiji," she said. "In the short term, we would like to see steps that advance political freedoms, such as allowing professional civilians to return to key government ministries."

Clinton is in Australia on the last foreign stop of a seven-nation Asia-Pacific tour. On Monday, she and U.S. Defense Secretary Robert Gates will meet their Australian counterparts to discuss expanding defense and security cooperation.