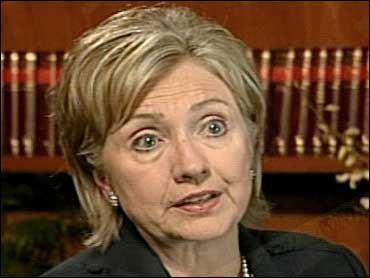 CBS News chief foreign correspondent Lara Logan reports that the U.S. Secretary of State came to Mexico this week with a very deliberate message: that America is partly to blame for Mexico's crime wave and the war against the drug cartels.

"We have to recognize and accept that the demand for drugs from the United States drives them north," Clinton told Logan, "and the guns that are used by the drug cartels against the police and the military - 90 percent of them come from America."

Those guns are being used in bloodshed that has left a trail of bodies in Mexico's border cities - right on America's doorstep.

Asked whether she thought the issue posed a present security threat to the United States, Clinton said, "No. What I think is that it has to be stopped now."

That sense of urgency is fueled in part by the possibility that terrorists could take advantage of the chaos and join forces with Mexico's drug cartels.

"We saw it in Colombia, where the insurgents made friends with the drug traffickers. We're seeing it in Afghanistan. We're watching the poppy trade help to fuel al Qaeda and Taliban extremists there," Clinton told CBS News.

"We know that where huge amounts of money are involved and ruthless people without conscience or morals are involved, we have to be quick to respond and recognize that left unchecked, this could, you know, mushroom," she added.

Clinton rejected outright the idea that Mexico was in danger of becoming a failed state, but she acknowledged that the drug cartels were better armed than Mexico's military.

America's top diplomat has been well-received in Mexico, where many feel the problem of the cross-border drugs and arms trafficking is finally getting the attention it deserves.