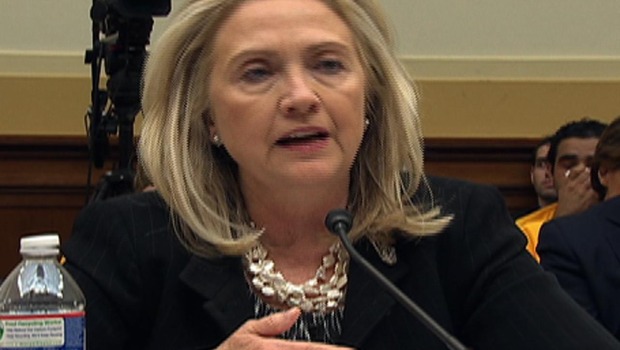 Secretary of State Hillary Clinton Thursday denied having any advance knowledge of a controversial program run by federal officials that allowed thousands of guns to be smuggled from the U.S. to Mexico in an effort to trace them to leaders of drug cartels before the program's existence became public.

She said the Justice Department did not "request coordination" or give "any kind of notice or heads up" about "Operation Fast and Furious," the ATF operation which put thousands of guns in the hands of Mexican drug cartels. The weapons may have been used in the murder of Border Patrol Agent Brian Terry.

During the hearing before the House Foreign Affairs Committee, Rep. Connie Mack (R-Fla.) asked Clinton at what point did the State Department learn about Operation Fast and Furious.

Mack said the Justice Department was required to receive a written waiver from the State Department in order to export arms to the drug cartels.

There is no evidence the Justice Department sought a waiver, Clinton said, but she offered to investigate the matter.

Clinton is the latest cabinet member of the Obama administration to face questions surrounding the operation.

Members of Congress investigating the scandal on Wednesday asked FBI director Robert Mueller to clear up questions about evidence found at the murder scene of Agent Terry.

He was shot and killed near the Mexican border on Dec. 14, 2010. Two weapons recovered at the scene were traced to "Operation Fast and Furious."

Tolleah Price is an associate producer for CBSNews.com.