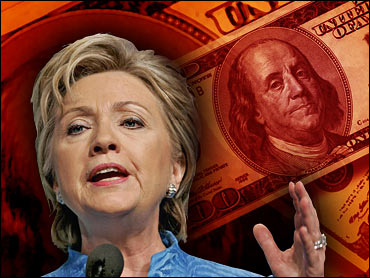 Barack Obama and Hillary Rodham Clinton plan to meet with some of her top contributors next week in an effort to calm donors who remain frustrated with Obama's presidential campaign.

The meeting is set for June 26 at the Mayflower Hotel in Washington, several top Clinton fundraisers said Tuesday. The former first lady will introduce Obama to her financial backers.

Jonathan Mantz, Clinton's national finance director, notified donors about the meeting by e-mail Tuesday and urged them to attend and to contribute to Obama, who clinched the Democratic Party's nomination on June 3.

Two people closely involved with Clinton's fundraising said the meeting had taken on added urgency after several of her money "bundlers" complained that they felt their concerns weren't heard during meetings last week with Obama campaign officials in New York and Washington.

Both individuals spoke on condition of anonymity because they were not authorized to speak publicly about the meeting.

Among other things, the donors want to make sure Obama knows that in order to get their help he needs to help Clinton pay down her campaign debt. As of the end of April, Clinton had more than $20 million in debt, a figure that likely increased by the time she suspended her campaign June 7.

Obama cannot use his campaign money to help Clinton with her debt, which includes at least $11 million of her own money. But he can encourage his donors to contribute to her campaign.

The two fundraisers who discussed the meeting said many donors also are furious that Obama's campaign hired Patti Solis Doyle as chief of staff to Obama's eventual running mate, calling it a slap in the face to Clinton and an implicit acknowledgment that she would not be on the ticket with him.

Obama spokesman Bill Burton said no inference about the selection of a running mate should be made from Solis Doyle's hiring.

"This was a long and hotly contested fight, so obviously there are some strong feelings about how it turned out and what needs to happen moving forward," he said. "But we're confident that the Democrats are united in their desire to defeat (Republican) John McCain."

Clinton and Obama will meet with two different groups of donors at the Mayflower a week from Thursday. One larger group will include donors who raised $250,000 for Clinton's campaign. A more intimate session will be reserved for about 30 fundraisers who collected $1 million or more.

"The challenge is reaching out to donors to ask them for money for a candidate that they've been on the opposite side of for a year and a half," said Alexander Heckler, Clinton's Florida finance chairman. "However, we have to take a deep breath and realize that we need to all work together and have a Democratic president elected."

Another Clinton fundraiser suggested there was no rift, noting that a vigorous primary contest had just ended.

"The reality is that we're two weeks from the day that the last primary was held," he added. "It takes a little while for staff to talk to each other, for lay organizations to talk to one another. It's taken a while to get the candidates available."

Heckler said he has been working with Obama's camp and said he and Obama's Florida finance chairman, Kirk Wagar, have been speaking daily to discuss fundraising strategies.

Separately Tuesday, Obama met in Washington with most members of the Congressional Hispanic Caucus, many of whom had supported Clinton. Obama acknowledged that he still has work to do to win Hispanic votes.

All the caucus members who attended the meeting pledged to support Obama, according to several members who spoke privately afterward.

Democratic Rep. Henry Cuellar of Texas said he told Obama he had worked his heart out for the former first lady and would work just as hard for Obama's election.