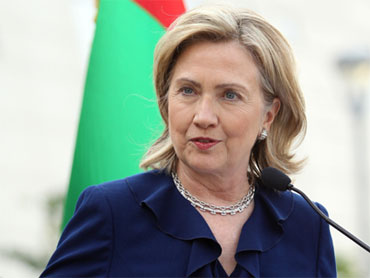 SANAA, Yemen - U.S. Secretary of State Hillary Rodham Clinton on Tuesday urged Yemen to step up security cooperation with the United States during an unannounced visit to shore up ties with a nation that is fast becoming a major focus of American counterterrorism efforts.

Following the Obama administration's pattern in Afghanistan and Pakistan, Clinton also emphasized that the United States wanted a broader relationship with Yemen beyond the fight against violent extremists. Clinton is the first U.S. secretary of state to visit Yemen in two decades.

"We face a common threat posed by the terrorists and al Qaeda, but our partnership goes beyond counterterrorism," she told reporters after a nearly three-hour meeting with Yemeni President Ali Abdallah Saleh. "We're focused not just on short-term threats but long-term challenges," such as Yemen's chronic poverty and other economic and social problems, she said.

Under tight security, Clinton landed in the capital of Sanaa, where she pressed Yemeni leaders to crack down further on radicals who have used the country as a base for launching attacks on the U.S. The radical cleric Anwar al-Awlaki, thought to be hiding in Yemen, is suspected of having inspired some of those attacks.

"I want to be frank about the fact that there are terrorists operating from Yemeni territory today — many of whom are not Yemeni, some of whom, I am sorry to say, are Americans," Clinton told students, lawmakers and rights activists at a town hall meeting. "They represent an urgent concern for the United States. They have sought to attack our country."

At the same time, Clinton said the U.S. supports efforts to address the underlying causes of extremism: poverty, corruption, social inequality and political divisions that have boiled into an insurgency. She said Yemen must stop the practice of child marriage and enact reforms.

"We seek a unified, stable, democratic and prosperous Yemen where civil society has room to operate, but al Qaeda does not," she said. She noted that the Obama administration had tripled aid to Yemen over the past two years and rebalanced the package so it is not "disproportionally" weighted toward military and security.

In the past five years, U.S. military assistance to Yemen has totaled about $250 million. In 2010, military and civilian aid was almost evenly split and combined for about $300 million.

Military aid to Yemen would reach $250 million in 2011 alone, U.S. officials said, and Clinton said there will be additional development aid.

Relations between the two countries were strained late last year by the disclosure of secret U.S. diplomatic cables by the WikiLeaks website. One cable reported that a senior Yemeni official lied to parliament by denying the U.S. was involved in airstrikes against extremists inside the country.

Saleh did not speak publicly after his lengthy meeting with Clinton, but it appeared to have been cordial. "Yemen is keen on continuing bilateral discussions to address development and security challenges," a Yemeni government statement said, welcoming Clinton's visit.

A senior U.S. official traveling with Clinton said Saleh dwelled on counterterrorism issues, describing his country as a victim of violent extremists and fully committed to the fight against them. The official spoke on condition of anonymity because of the sensitive nature of the top-level talks, and called Saleh's comments "encouraging."

Clinton, meanwhile, told Saleh that the U.S. was interested in helping Yemen meet its economic and social challenges, and made it clear the U.S. hoped to see open, credible elections.

The senior U.S. official traveling with Clinton said Saleh expressed surprise at the disclosures in the WikiLeaks cables. But the official said Saleh's comments were gentle in comparison to what the U.S. has heard from other Mideast leaders.

Clinton's visit to Yemen was shrouded in secrecy for security reasons, and her armored motorcade was escorted through the city by the Yemeni military and heavily armed diplomatic security agents.

Yemen has been the site of numerous anti-U.S. attacks dating back to the 2000 bombing of the USS Cole in Aden harbor, which killed 17 American sailors

Just last month, several CIA operatives were the targets of a failed bombing at a restaurant in a Sanaa suburb, and Al Qaeda in the Arabian Peninsula was thought to be behind the attempted bombing of an American airliner landing in Detroit on Christmas Day 2009.

Al-Awlaki is thought also to have inspired the deadly 2009 shooting rampage at Fort Hood, Texas. The al Qaeda group's fighters attacked the U.S. Embassy in Sanaa twice in 2008.

In addition to battling terror groups, Yemen, the poorest nation in the Arab world, faces a Shiite rebellion in the north and a separate secessionist movement in the south. Washington has urged Yemen to seek a peaceful resolution of the conflicts, in the hope of easing popular discontent.

But Washington often has complained that Yemen needs to share more information and wage a more determined fight against militant groups.

With the help of U.S. money and training by elite U.S. commandos, Yemen is setting up provincial anti-terrorism units to confront al Qaeda in its heartland.