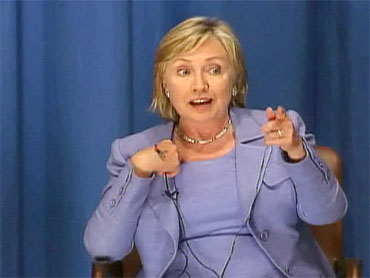 U.S. Secretary of State Hillary Rodham Clinton's temper flared on Monday when she thought a Congolese university student asked for her husband's thinking on an international matter.

"My husband is not secretary of state. I am," an obviously annoyed Clinton replied sharply.

A week after former President Bill Clinton traveled to North Korea to secure the release of two detained American journalists and stole the limelight from the start of his wife's first trip to Africa, Clinton was clearly nettled by the question at a town hall forum in Kinshasa.

"You want me to tell you what my husband thinks?" she replied incredulously when a translator told her that a male student had asked what the former president thought of World Bank concerns about a multibillion-dollar Chinese loan offer to the Democratic Republic of Congo.

"If you want my opinion, I will tell you my opinion. I am not going to be channeling my husband," she said.

The question was left unanswered as the moderator of the event quickly moved on.

It appears, however, that the translator made a mistake in relaying the question to Clinton.

According to a pool report, the person who asked the question later explained to the secretary of state that he wanted to know what President Obama thought about the deal, not what Mr. Clinton thought.

Sidelined for weeks after she was injured during a fall this spring, Clinton returned to a flurry of speculation that she had been shoved to the side as a diplomatic force inside the administration, overshadowed by globe-trotting President Barack Obama, Vice President Joe Biden and a bevy of heavyweight special envoys assigned to the world's critical hotspots.

Clinton launched into a series of high-profile speeches and television appearances. But just as she landed in Africa, her ambitious visit ran into stiff competition from her husband's secret mission to North Korea, which drew heavy coverage for his role in freeing the two journalists and talking with the regime's longtime leader, Kim Jong Il.

It was not immediately clear why Clinton reacted with such umbrage, and she quickly recovered her cool and moved on to other subjects Monday. Just before the question that set off her anger, another student had asked if the U.S. and the West felt a need to apologize to the people of Congo for colonialism and postcolonial interference.

"I cannot excuse the past and I will not try," she said. "We can either think about the past and be imprisoned by it or we can decide we're going to have a better future and work to make it."

Clinton is in the middle of a marathon 11-day tour of Africa and has held to a grueling schedule of official meetings and private events that have kept her busy from sunrise to well after sunset.

She returned to the public eye in mid-July with what aides billed as a major foreign policy address at the Council on Foreign Relations in Washington. Since then, she has traveled to India and Thailand and now to seven nations in Africa.

Hours after she left Washington for Africa last Monday, news broke that Bill Clinton had gone on the humanitarian mission to North Korea to win the release of Laura Ling and Euna Lee, two television journalists who had been arrested there and sentenced to 12 years at hard labor.

Mrs. Clinton arrived in Kenya to find herself peppered with questions about his role in the secret mission to North Korea.